George IV - The Grand Entertainment by Steven Parissien – a review 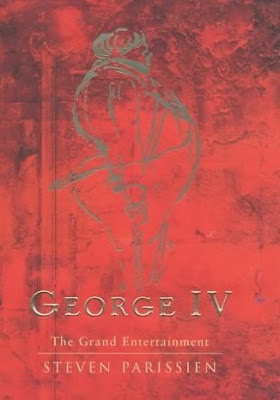 George IV, The Grand Entertainment, is a very readable biography which presents the events of George IV’s life in a thematic way. The emphasis of the book is a re-evaluation of George’s traditional image as “a knowledgeable and discriminating patron of the arts”. Parissien is able to draw on his own experience as an expert in the field of Georgian architecture and style, as well as recent research by specialists in the history of architecture, art, fashion and politics, to build on Hibbert’s exemplary biography by presenting new insights into George’s life.

The book takes its title from the name of an engraving by Cruikshank published in August 1814. The engraving was one of many that ridiculed George. In The Grand Entertainment, he was portrayed as the chief performer in the “Royal Raree-Show”, dancing with his mistress, Lady Hertford, and her husband, in front of Carlton House.

Rather than following a strictly chronological style, Parissien’s book starts with the scene of George IV’s death and then examines the major themes of George’s life under four sections: governing passions, family affairs, the image of royalty and the image askew.

Under governing passions, Parissien looks at the loves of George’s life –women, clothes, building projects, art collecting, food, play soldiering and old French style. The book claims to offer no new information about George’s mistresses, but nevertheless gives a comprehensive chapter on the succession of women in his life. The following chapters are filled with details about George’s other obsessions - from his love of clothes and posturing in military uniforms to his somewhat unfortunate predilection for all things French, even at a time when England was at war with France!

The section on family affairs examines George’s disastrous marriage and his relationship with his daughter. In particular, it highlights the stark contrast between George’s unpopularity and the public grief shown at the premature death of Princess Charlotte, which is likened to the posthumous adulation accorded to Princess Diana after her death in 1997.

The last two sections examine George’s views on royalty and how these were worked out in practice. A new aspect, of which I was previously unaware, was the influence of the Freemasons on George and how this served to increase his natural fondness for ceremony and fuelled his lavish architectural projects to build royal palaces fit for a king. The account of George’s extortionately expensive coronation includes details which show that this state occasion was far from perfect and indicate how George was beginning to withdraw from the public he had alienated by his behaviour.


What is most remarkable about George’s Regency and reign is not … his role in preserving the status and respect accorded the monarchy, but that it survived his appalling neglect of his office and its responsibilities.