Visitors started flocking to Weymouth in the second half of the 18th century when the seaside came into fashion. The sheltered bay offered safe sea bathing and attracted Royal visitors – first the Duke of Gloucester and then his brother George III. The town grew to accommodate the needs of the wealthy tourists and was able to offer fashionable entertainments including assembly rooms, libraries and a theatre.
You can read about sea bathing in Regency Weymouth here.
You can read about George III's visits to Weymouth here.


The Assembly Rooms were housed in Stacie’s Hotel, which was later known as the Royal. It was an imposing building with double bow windows facing the sea, in the centre of Gloucester Row, close to Gloucester Lodge. The main room could hold 100 couples for dancing and there were rooms available for card playing and tea drinking.


Balls were held twice a week on Tuesdays and Fridays. As in Bath, the Master of Ceremonies laid down a set of rules for the Rooms that had to be adhered to. This role was held by Mr Rodber from 1784 to at least 1815. The rules and orders for balls he established were as follows:

1. That Gentlemen are not to appear in the rooms, either on Tuesday or Friday evenings, in boots; nor Ladies in riding-habits.
2. That the ball shall begin as soon as possible after seven o’clock, and finish precisely at eleven.
3. That Ladies and Gentlemen who dance down a country dance, shall not quit their place till the dance is finished, unless they do not mean to dance any more that night.
4. That no Lady or Gentleman can be permitted to dance in coloured gloves.
5. That after a Lady has called a dance, and danced it down, her place in the next dance is at the bottom.
6. That no tea-table be carried into the card-room.
7. That Gentlemen will be pleased to leave their swords at the door.
8. That no dogs be admitted.

How much did it cost to attend balls in Regency Weymouth?


In 1815, a single ticket during three seasons cost a guinea (£1 1s or 21s) and a three person ticket cost £2 2s. This is rather more than the 14 shillings per person that it cost for a ticket to a season of balls at the Bath Assembly Rooms in the same year, but it did include two balls a week rather than one, the balls may have run all year and there is no mention of an extra charge for tea which effectively doubled the price of a ball in Bath.

A guinea equates to approximately £60.70 in 2010 using the Retail Price Index (RPI) or £705 if adjusted for average earnings. This suggests that the balls at the Assembly Rooms were only for the wealthy. For more information on this, please look at my article: How much did a ticket to a Regency ball really cost?

Gentlemen and ladies could alternatively pay just to walk the rooms at a cost of 10s 6d and 5s respectively. This compares favourably with Bath for gentlemen who would have had to pay twice as much for a subscription to the card and reading rooms in the Assembly Rooms; the cost for ladies is identical to that in Bath.

Harvey’s library was on the centre of the Esplanade and boasted a collection of over 8,000 volumes as well as a large and comfortable room for examining newspapers and periodicals.

There was an elegantly-furnished card room over the library. The subscription rate in 1815 was 10s 6d per quarter, equivalent to £30.30 using the RPI or £352 using average earnings.

Wood’s library was also on the Esplanade and could offer for hire a wide range of musical instruments in addition to books. The subscription rate here was 2s 6d per week – equivalent to £7.22 using the RPI or a rather expensive £83.90 using average earnings.

The theatre had been refurbished by James Hamilton and was under the management of Mr Hughes. It seated an audience of up to 400 persons, with performances on Mondays, Thursdays and Saturdays.

As an alternative to sea bathing, there was a hot salt water bath in the centre of town, for those who chose not to venture into the sea. In 1815, this would have cost 3s 6d before 6pm and 4s after 6pm. The equivalent costs today would be £10.10 and £11.60 using the RPI or £117 and £134 using average earnings. Sedan chairs were always available to take the clients home after being dipped.

This advertisement for the baths appeared in the 1857 guide to Weymouth as a Watering Place. Although it is long after the Regency, it provides an interesting insight into what might have been available: 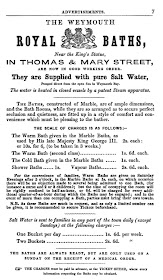