God Save the King by Laura Purcell – a review 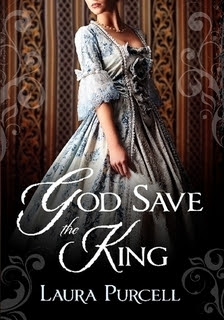 Don’t read this book unless you are prepared to become emotionally involved with the lives of people who died 200 years ago.

God Save the King is a historical novel which gives an intimate insight into the lives of some of the women in the family circle of George III, in particular, his wife Queen Charlotte, his eldest daughter Princess Charlotte, known as Princess Royal, and one of his younger daughters, Princess Sophia.

Purcell represents Queen Charlotte sympathetically, showing a woman whose life was dedicated to duty, a woman who put the King above everything, but whose life fell to pieces when her husband became mentally ill. Through sheer strength of will, she rebuilt her life, but this personal tragedy left her emotionally cold and afraid.

Her harsh attitude towards her daughters, expecting them to make all the same sacrifices that she had chosen to make, does not make her very lovable. Reading her story does not make me like her any more, but it helps me to understand the agony she went through when her beloved husband became a different person – someone whom she could no longer love nor trust.

I think that Purcell’s interpretation of the events surrounding Princess Sophia’s life is very plausible and well thought out. Although things might not have happened that way, there is no historical evidence to suggest that they did not. Princess Royal’s story is told sensitively – a heart-wrenching mixture of love and sadness, freedom and fear. The book comes with an author's note, explaining those areas where the narrative is not based strictly on historical fact.

The novel is written in the present tense and it took me a while to get used to this – it is not the choice I would have made, but I have to confess that, after a while, I did not really notice.

I cannot say they I enjoyed the book exactly; there is so much misery in the lives of these royal women that it was a relief to finish it. But I did become involved in the plight of these characters, and Queen Charlotte’s death scene, when she remembers what she has lost, made me cry.

This book is well-written, and is an accessible way of learning about the lives that were affected so dramatically by the mental instability of George III. I would highly recommend it, but suggest you have a box of tissues at the ready!

God Save the King was re-released as Queen of Bedlam in 2014.
Rachel Knowles
Share