A state funeral for William Pitt the Younger

William Pitt the Younger died on 23 January 1806 at the age of 46. At the time of his death he was serving as First Lord of the Treasury and Chancellor of the Exchequer simultaneously! He was acting as Prime Minister, although there was no formal recognition of the post at this time (1). He had suffered from ill health for some years, and the strain of leading the government during a time of war proved too much for his constitution.

The notice of his death in The Gentleman’s Magazine for January cites the war as hastening his demise and records that the House of Commons voted that he should be given a public funeral: 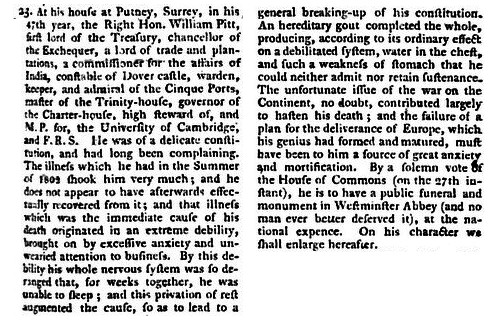 On Thursday 20 and Friday 21 February, Pitt’s body lay in state in the Painted Chamber in the Palace of Westminster and was visited by crowds of people.

The public funeral was held on Saturday 22 February with the procession starting at 10am.

The Chief Mourner was Pitt’s brother, the Earl of Chatham.

The body was “covered with a black velvet Pall, adorned with Eight Escocheons of the Arms of the Deceased. Four supporters of the Pall, the Archbishop of Canterbury, and Dukes of Beaufort, Rutland, and Montrose.”

The funeral was held at Westminster Abbey and was attended by the Dukes of Cambridge, Cumberland and York and many members of both Houses of Parliament.

The full report of the funeral appeared in the March issue of The Gentleman's Magazine: 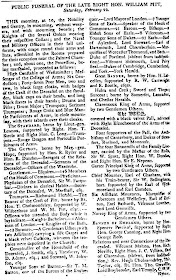 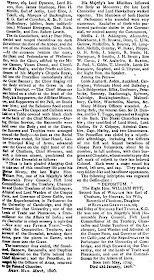 Note
(1) For more information on the evolution of the term 'Prime Minister', see the Number 10 website.