One of the things I like about reading old books and periodicals is that you never know what gems you are going to find. An advert for stays, a Georgian recipe for a treatment for sunburn or an 18th century fashion print:

Another treasure that I like to find is the Georgian brain teaser. An enigma or puzzle was a common feature in The Lady’s Magazine – a periodical exclusively for ladies, first published in 1770. I found the following enigmatical list in the January 1774 issue and thought I would give it a go. After all, as all the answers were books of the bible, I only had 66 possible answers to choose from! 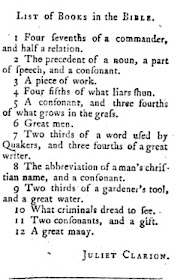 In case you are finding this difficult to read, the transcription reads as follows:

1. Four sevenths of a commander, and half a relation.
2. The precedent of a noun, a part of speech, and a consonant.
3. A piece of work.
4. Four fifths of what liars shun.
5. A consonant, and three fourths of what grows in the grass.
6. Great men.
7. Two thirds of a word used by Quakers, and three fourths of a great writer.
8. The abbreviation of a man’s christian name, and a consonant.
9. Two thirds of a gardener’s tool, and a great water.
10. What criminals dread to see.
11. Two consonants, and a gift.
12. A great many.

After much effort (and working backwards from a list of bible books!) I managed to work out 11 of the answers, but was totally flummoxed with number 5. Eagerly I scanned through the magazine, looking for the answers.

I soon discovered that The Lady’s Magazine did not print official answers as such – instead, they printed solutions offered by their readers. I managed to track down the “suggested answers” submitted and found to my amusement that several comments had been made about number 5. Mistakes were as common in 1774 as they are today – number 5 should read “A VOWEL and three fourths of what grows in the grass.”

With this vital piece of information, can you solve all twelve?

You can find the answers here.

Source:
The Lady’s Magazine or Entertaining Companion for the Fair Sex, Appropriated Solely to Their Use and Amusement (1774)
Rachel Knowles
Share