The First Georgians exhibition at the Queen’s Gallery 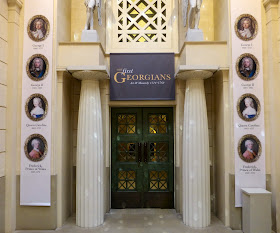 Why I am blogging about The First Georgians

I was privileged to attend the exhibition preview. But I claim to blog about late Georgian and Regency history, so why am I writing about the First Georgians exhibition which stops in the year that George III became King?

There are two reasons why this exhibition is still relevant. Firstly, the reigns of George I and George II were immediately before that of George III and so set the scene for the late Georgians. What took place in those years shaped the nation that George III became ruler of.
Secondly, George III was born in 1738, and so his formative years took place during the last 22 years of his grandfather George II’s reign.

For those of you that are unfamiliar with the early Georges, here is a very brief introduction:


The Act of Settlement of 1701 decreed that Great Britain had to be ruled by a Protestant monarch. Accordingly, George I, Elector of Hanover, was proclaimed King on the death of Queen Anne who had no surviving offspring.

George I had two children, George and Sophia, but was no longer married to their mother, Sophia Dorothea. George had divorced and incarcerated his wife for abandoning him when she had eloped with her lover, whose death it was generally believed that he had arranged.

He did not marry again, but had two main mistresses, Ehrengard Melusina von Schulenburg, Duchess of Kendal, and Charlotte Sophia Kielmannsegge, Countess of Darlington.

In 1717, he fell out with his son George so badly that he banished him from the Court. He often visited Hanover and died there unexpectedly in 1727.

George II was the last British monarch not to be born on British soil. His wife was Caroline of Ansbach, a beautiful and intelligent woman, who was very popular at Court. She embraced the philosophy of the enlightenment, respecting reason above tradition, and was a keen collector of art.


They had four children in Hanover: Frederick, Anne, Amelia and Caroline, and another four in England: George who died in infancy, William, Mary and Louisa.

George II was the last British monarch to lead his troops into battle, which he did at the Battle of Dettingen in 1743.

Like his father, George II quarrelled with his eldest son. He banished Frederick, Prince of Wales, and his wife Augusta from Court in 1737 after a row over the birth of their first child. Frederick had whisked Augusta away from Hampton Court whilst she was in labour to make sure his parents would not be there at the birth. The breach between Frederick and his mother was never healed.

The exhibition composes entirely of items from the Royal Collection. It presents us with a snapshot into the lives of the first Georgian Kings: their families and where they lived; the battles they fought and the works of art with which they surrounded themselves.

The first room introduces us to the early Georgians with some lovely portraits, including that of Caroline of Ansbach (above) and a pastel of George III by Jean-Étienne Liotard.


The next three rooms are themed: royal residences, maps and the prints of Hogarth:

This display includes prints of some of the internal rooms of the royal residences, such as the King’s Gallery at Kensington and the Queen’s State Bedchamber at Hampton Court.


The maps were largely collected by William Augustus, Duke of Cumberland, a younger son of George II. He was nicknamed ‘Butcher Cumberland’ because of his ruthless policy against the Jacobite rebels after the Battle of Culloden in 1746.


This room includes a selection of prints by Hogarth including The Harlot’s Progress which acted as a comment on the society of the time. This series of prints tells the story of the fall of the harlot, Moll Hackabout, and they were hugely popular in the 1730s.


From the monochrome prints of Hogarth, you pass into the first of the large display rooms, where you are dazzled by colour. The walls are covered with paintings, including several huge pieces by Rubens, collected by the early Georgians and exhibited symmetrically as they would have displayed them.


There are two tables, beautifully gilded and supported on either side by gilt pedestals which would have held candelabra. The candlelight would have been reflected in the mirrors which would originally have been behind each table to dazzling effect.

One item that particularly caught my interest is a clock. It was bought by Frederick, Prince of Wales, but you have to search to find the clock which is very small compared to the overall size of the piece. In the bottom, there is an organ which plays tunes by Handel.

Two small chambers off the Old Masters room show displays of royal miniatures and beautifully illustrated books of botany. A further anteroom has a collection of pistols, snuff boxes and other decorative items.

Georgian royals, giltware and the Garricks


The second of the two large display rooms is my favourite and contains portraits of all the early Georgians. There is an enormous painting of six of Frederick Prince of Wales’ children, including the eight year old, George III, wielding a bow.


This room also boasts two paintings by Canaletto depicting the River Thames and a table laden with gilt tableware.


One of my favourite works of art on display is the picture of David and Eva Garrick which has been used as the definitive image of the exhibition. I was surprised to discover that this very colourful and cheerful picture was in fact painted by William Hogarth, whom I have always associated with the rather sobering black and white prints displayed in the earlier room.


The final room to explore is to the left of the portrait room at the start of the exhibition. This is the Millar Learning Room which has been set up as a Georgian coffee shop. This is an interactive space, particularly good for those with children. There are background noises and ‘windows’ displaying Georgian street scenes. There are bags full of family activities available, short videos playing on a screen set within a picture frame and period hats with headphones, so that you can take in the atmosphere. I really enjoyed visiting the exhibition.


There are three videos which you can watch online:
Warrior Kings
A King’s Ransom
The Enlightened Queen
and lots more information about the different items on display on the Royal Collection website.

Rachel Knowles writes faith-based Regency romance and historical non-fiction. She has been sharing her research on this blog since 2011. Rachel lives in the beautiful Georgian seaside town of Weymouth, Dorset, on the south coast of England, with her husband, Andrew.
Find out more about Rachel's books and sign up for her newsletter here.