The Georgian Dukes of Cumberland

The trouble with names

One of the confusing things about the Georgian royals is that they were not very original when it came to names. As a result, we have four kings with the same name: George I, II, III and IV. At least they have numbers after their names to distinguish them!

I decided to research the three Dukes. I already knew about the third Duke, Ernest. But what were the other two like and how did they fit into the royal family? I needed to know when each Duke lived and died in order to know who the Duke of Cumberland was in a specific year.

I discovered that the title did not pass from father to son as might be expected, but was created afresh in each generation as neither of the first two Dukes had legitimate heirs to inherit the title. But despite this, the three Dukes had a lot in common. They were all forceful characters who exerted a strong influence over their current or future sovereigns and possessed scandalous reputations.

William, Duke of Cumberland is most remembered for his role in the Battle of Culloden in 1746. His Whig supporters nicknamed him ‘Sweet William’ for successfully quashing the Jacobite rebels, but his Tory enemies dubbed him ‘Butcher Cumberland’ for showing no mercy to his enemies, even after they had surrendered.

The Duke was one of George III’s key advisors in the early years of his reign and he resented the fact that George's mother Augusta was appointed Regent should George II die before George III had reached his majority rather than himself. He died unmarried in 1765. And yes, it was this Duke who was fond of collecting maps, some of which were on display in the First Georgians exhibition.

Prince Henry (7 November 1745(2) – 18 September 1790) was the fourth son of Frederick, Prince of Wales, and Princess Augusta, and a younger brother of George III. He was made Duke of Cumberland and Strathearn and Earl of Dublin in 1766. He died in 1790 without any legitimate issue.

Henry, Duke of Cumberland, was known for his disreputable liaisons. In 1769, he was found in a compromising situation with Lady Grosvenor and her husband successfully sued him for ‘criminal conversation’, that is, adultery. Lord Grosvenor was awarded damages of £10,000 and the case generated lots of adverse publicity for the royal family. 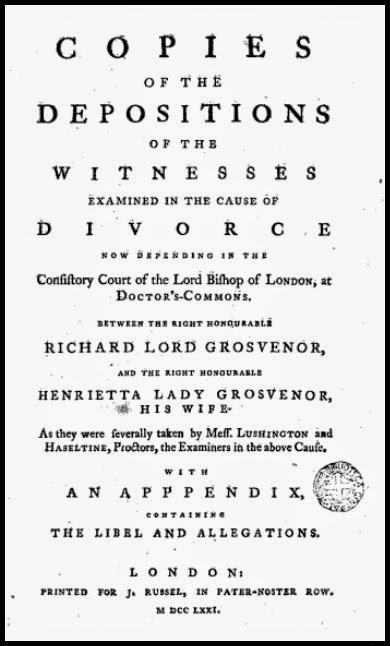 But his crowning folly was his marriage in 1771 to the widow Anne Horton, a commoner with a dubious reputation. This union alienated his brother George III and triggered the Royal Marriages Act of 1772, which required the King’s permission for the marriage of any descendant of George II.

The Duke was reconciled to George III after offering his services during the Gordon Riots of 1780, but this new understanding did not last. Henry became increasingly friendly with George, Prince of Wales, and George III resented the unhealthy influence that the Duke had over his son.

Prince Ernest, Duke of Cumberland and Teviotdale and King of Hanover (1771-1851)

Like the previous holders of the title, Ernest, Duke of Cumberland, seemed to attract controversy. When his valet committed suicide in 1810, Ernest was accused of his murder. When it was rumoured that his sister Sophia had given birth to an illegitimate child, it was alleged that he was the father. When his cousin Princess Frederica’s husband died suddenly in 1814, conveniently releasing her from her marriage so that she could marry Ernest, his now twice widowed wife was suspected of murder.

Ernest was a radical Tory and strongly Protestant in his politics. He was a strong influence on his brother George IV and urged him to stand against the Catholic Relief Act, temporarily bringing down Wellington’s government as a result. He was vehemently opposed to the Reform Act of 1832.

The pictures of the Dukes and Duchess of Cumberland are all from The Georgian Era by Clarke (1832).