Arlington Court is a Neoclassical house near Barnstaple in North Devon. The stables are home to the National Trust Carriage Museum.

The Arlington estate was owned by the Chichester family who had been wealthy Devonshire landowners since the 14th century. They supported the King during the Civil War and had a strong Catholic heritage. A Georgian house was built at Arlington in the early 1790s and a second Georgian house, in the Neo-classical style, was built in the 1820s. It is this house that still stands today.

The estate was given to the National Trust by Miss Rosalie Chichester in 1949.

Colonel Chichester married Mary Anne Cary in 1790 and commissioned a fashionable Georgian mansion to be built at Arlington to replace the Tudor manor house he had inherited.

After the death of his first wife in childbirth, Colonel Chichester married the Protestant, Agnes Hamilton, with whom he had six children. To the great distress of his family, he publicly renounced his Catholic faith in Exeter Cathedral in 1793.

By the early 1820s, it became apparent that the Colonel’s Georgian house had structural issues and he commissioned the architect Thomas Lee to build him a new house in the Neo-classical style. This house was completed in 1823, but sadly Colonel Chichester died the same year and never lived in it.

Known to his friends as ‘Arlington Jack’, Sir John Chichester served in the navy before inheriting Arlington on the death of his father in 1823. He decorated and furnished the house that his father had commissioned but never lived in; the Morning Room, Ante Room and Boudoir still have the original schemes of decoration.

• The Neo-classical frontage of Arlington Court 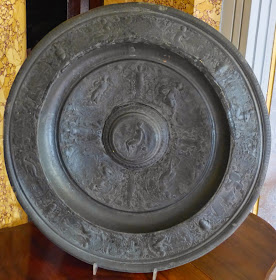 • Snuffboxes and other items from Miss Chichester's collections 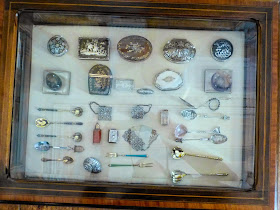 • The ceiling in the White Drawing Room 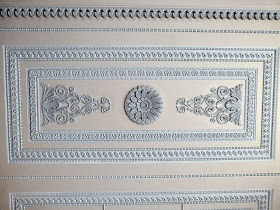 • The National Trust's collection of carriages (in the stables)