Strawberry Hill is a Gothic castle in Twickenham in London created by Horace Walpole.

Horatio Walpole, known as Horace, was the youngest son of Sir Robert Walpole, the first British Prime Minister. In 1741, after spending two years on the Grand Tour, Walpole became a Whig MP. He was a prolific letter writer and author of a Gothic novel, The Castle of Otranto (1764), as well as an antiquarian and collector. He became 4th Earl of Orford in 1791 on the death of his nephew.

The creation of Strawberry Hill

In 1747, Horace Walpole took out a lease on a house in Twickenham, not far from the River Thames. Known locally as Chopped Straw Hall, Walpole renamed it Strawberry Hill after discovering a reference to the name in an old lease. He bought the property in 1749 and embarked on an ambitious building project to transform Strawberry Hill into a model of Gothic architecture.

The original property consisted of two buildings joined together. Walpole delighted in their lack of symmetry and used them as the core of his new house. With the help of a committee of friends including John Chute, an architect and the owner of The Vyne in Hampshire, and Richard Bentley, an illustrator, Walpole designed his fairytale castle.

He clad the outside of the original buildings and added battlements and pinnacles. Internally, he added chimney places and bookcases, stained glass windows and intricate ceiling and wall designs. His aim was to create a route through his house where the visitor was constantly surprised, with gloomy areas leading into bright open spaces.

Strawberry Hill as a tourist attraction

Walpole created Strawberry Hill as his Gothic summer house and filled its rooms with his collections of art, books and antiquities. The aristocracy flocked to see his fairytale castle and its famous collections. Walpole showed round some visitors, but others were taken round by his housekeeper who expected a guinea from each person for the trouble.

Walpole wrote A Description of the Villa of Mr Horace Walpole at Strawberry-Hill near Twickenham, Middlesex, an illustrated guide to Strawberry Hill, and printed it on his own printing press. However, he seldom gave copies out as he feared that visitors would never leave if they sought to see everything in the book!

In The Description he hoped that “the prospect would recall the good humour of those who might be disposed to condemn the fantastic fabric, and to think it a very proper habitation of, as it is, the scene that inspired, the author of the Castle of Otranto”. (1)

By 1774, Walpole had introduced a ticketed system. Tours were only available from 1 May to 1 October and he only allowed a maximum of four visitors per day. Children were expressly prohibited!

On Walpole’s death in 1797, Strawberry Hill passed to his cousin, the sculptor Mrs Anne Seymour Damer, for life. She lived there until 1811 when she gave the house up because she found it too expensive to maintain.

Two generations later, Lady Elizabeth’s grandson, George, 7th Earl Waldegrave, was sent to prison for riotous behaviour, and he blamed the Twickenham justice system for convicting him. In 1842, he took his revenge on Twickenham by auctioning off all Walpole’s collections and leaving the house empty to decay.

A new lease of life

After George’s death, his widow, Frances, restored and lived at Strawberry Hill. In 1923, the property was bought to house what is now St Mary’s University College. In 2007, the College leased the property to the Strawberry Hill Trust and renovation work began. It reopened to the public in 2010.

• The Gothic façade of Strawberry Hill, restored to its white magnificence. 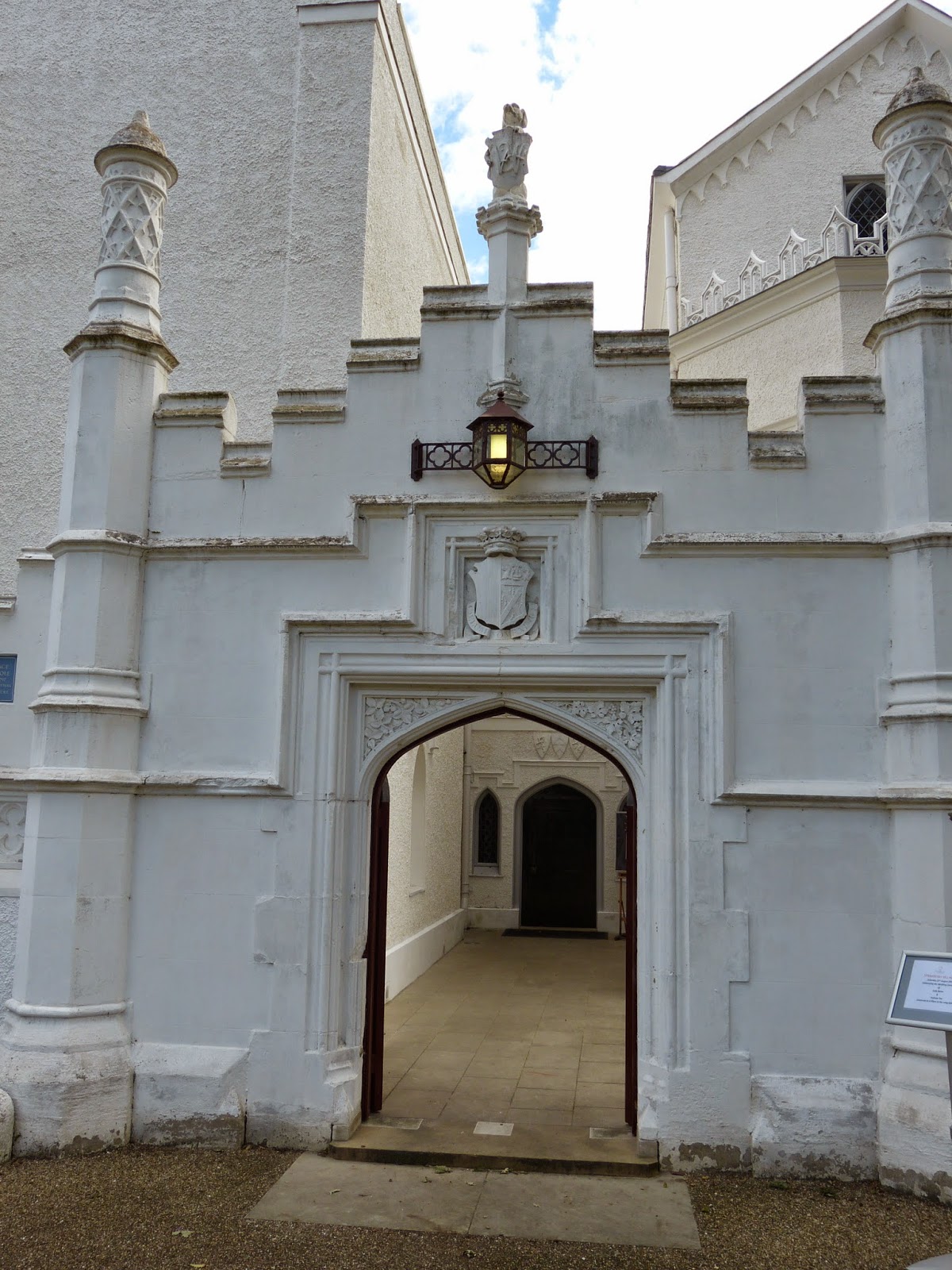 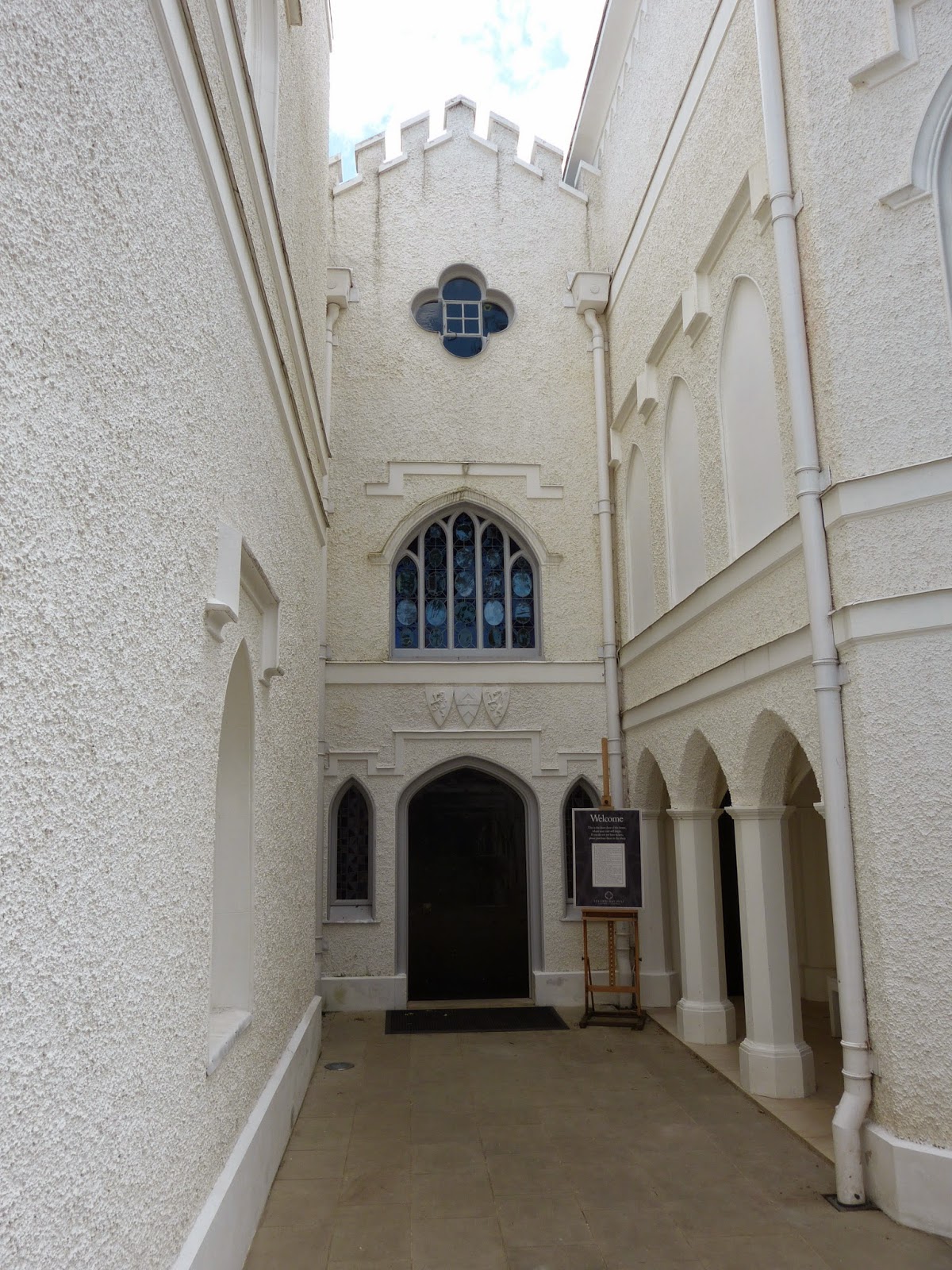 • The Entrance Hall – Described by Walpole as “the most particular and chief beauty of the Castle”. (2) The staircase was inspired by the library staircase at Rouen Cathedral.

• The Great Parlour - In Walpole’s time, the famous painting of Walpole’s three nieces, The Ladies Waldegrave, by Sir Joshua Reynolds would have hung opposite the fireplace. The original Gothic fireplace has been restored; the chairs are replicas.

• The Library – This is the most amazing room! The Gothic arches swing open to enable access to all the books. They were designed by John Chute.

• The Gallery – The fan-vaulted ceiling is made of papier mâché. The brilliance of the restored gilding in this room is breathtaking!

• The Tribune – This room is square with semi-circular recesses in each side. Walpole kept the most valuable part of his collections here including a cabinet containing his precious collection of miniatures.

• The Round Drawing Room – The fireplace was inspired by the tomb of Edward the Confessor in Westminster Abbey and “improved” by Robert Adam. Adam also designed the frieze round the walls.

• The Chapel (in the carpark of St Mary’s University)

Note
(1) From the preface to A Description of the Villa of Mr Horace Walpole at Strawberry-Hill near Twickenham, Middlesex (1774).
(2) In a letter from Horace Walpole to Sir Horace Mann reported in The Gentleman's Magazine (April 1834).