Painting Paradise: The Art of the Garden – 2015 exhibition at the Queen’s Gallery

On Friday, I was invited to attend a bloggers' event to preview the new exhibition at the Queen's Gallery, Buckingham Palace: Painting Paradise – The Art of the Garden.  The exhibition is now open and runs until 11 October 2015. 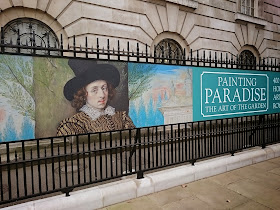 A garden walk through time

The exhibition portrays the history of the garden using paintings and objects from the Royal Collection. As you walk through the exhibition rooms, you are taken on a chronological tour of the development of the garden, starting with Paradise and ending with The Horticultural Garden. The displays include some lovely touches, such as sprays of artificial flowers, an arbour and a pergola, which help to create the atmosphere of being in a garden. 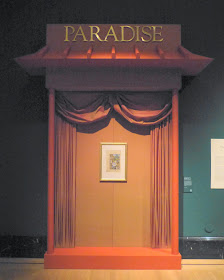 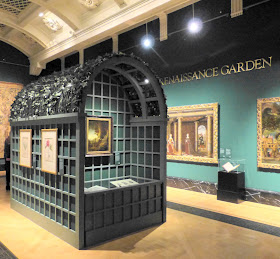 The selection of items on display in this section includes a rare copy of Thomas Hyll’s book entitled The Profitable Arte of Gardening (1586) and a picture of the family of Henry VIII showing the Great Garden at Whitehall Palace in the background.

The picture of Charles II and the pineapple is fascinating. Although it is said to be the presentation of the first pineapple grown in England, both the King and the man on the left, thought to be his gardener, John Rose, had died before this was achieved! The house in the background may be that of Dorney House, a large house near Oatlands Park. Unusually, Charles II is pictured wearing fashionable clothes rather than ceremonial robes.

In the cabinets before you enter the next garden phase, there are some beautiful decorative objects from the Royal Collection. My favourites are the pieces of porcelain by Chelsea Porcelain Works with detailed botanical designs. There is also a very elaborate Minton soft porcelain pen tray that was given to Queen Victoria when she was a girl. 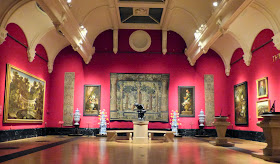 The Baroque Garden includes a superb example of Georgian recycling - a cabinet made around 1785 incorporating 17th century Florentine decorative panels.

As might be expected from the Royal Collection, there are lots of pictures of royal gardens including several of Hampton Court. Of special interest is the pair of sundials on display which were originally in the gardens, but which have now been replaced with replicas to conserve the originals.

The tulip vases were used to display flowers and bulbs at Hampton Court Palace.

I particularly liked the picture of the water gardens at Bushy Park, later home to William IV. 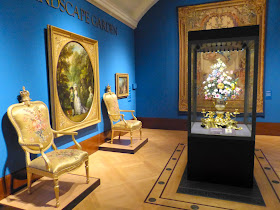 There is a magnificent porcelain sunflower clock made by the Vincennes Porcelain Factory c1752 which was acquired by George IV in 1819. The sunflower is the symbol of Louis XIV of France, the Sun King. Behind this exhibit hangs a Gobelins tapestry.

The pair of armchairs is embroidered with designs by Mary Moser.

The Georgian period is well-represented in the exhibition, particularly in The Landscape Garden. There are some lovely paintings and prints of gardens including those at Carlton House, Chiswick, Stowe, Kew and Windsor.

The Earl of Burlington's gardens at Chiswick

The gardens at Kew

The palace in the next two pictures is not the building we now call Kew Palace, but rather the White House that used to stand opposite.

Some of my favourite items in the exhibition are the books of Humphry Repton’s designs for the gardens at Brighton Pavilion. The illustrations are beautiful, though frustratingly we are limited to just the two pages which are open. How I longed to turn the pages and see the other designs!

The final room contains an interesting array of objects including some jewellery belonging to Queen Victoria, a child’s wheelbarrow and a pair of fans.

If you love historic gardens, or are interested in seeing more from the Royal Collection, then this is an exhibition not to be missed!

For more information, go to the Royal Collection website.