I was recently contacted by Jayne Parkes who had inherited a wonderful historical booklet from her mother and wanted to know whether I could tell her anything about it. Jayne has very kindly agreed to let me share her booklet with you.

The booklet is labelled ‘Souvenir’ and contains a miniature of a lady and a lock of hair.

This would be interesting enough in itself, but in addition, the booklet includes the following note: 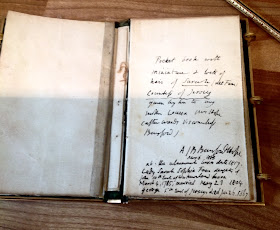 As far as I have been able to make out, the text reads:

Let us first consider the subject of the miniature. Sarah Child Villiers, Countess of Jersey (1785-1867), was one of the leading figures of Regency society. You can read more about her in a previous post on this blog. I am not sure what the line ending ‘date 1817’ says, but the details below it concern the birth, marriage and death of Lady Jersey and this information tallies with other sources.

But is the miniature really of Lady Jersey? Below is a close up of the miniature compared with a portrait of Lady Jersey that appeared in The Illustrated Belle Assemblée for 1844 on the left and a print of her on display at Osterley Park on the right. I think that the similarity is very good.

The miniature was given to Louisa, Viscountess Beresford. In 1837, The Court Magazine and Monthly Critic printed a portrait of the Viscountess together with a brief history of who she was and, very usefully, a list of her children by her first marriage.

Louisa married Thomas Hope of Deepdene, Surrey, on 16 April 1806. Thomas Hope was a merchant banker, art collector and author. His most famous publication was Anastasius (1819) — a racy novel which rivalled the popularity of Byron’s work and was said to have made Byron weep because he had not written it!

On 29 November 1832, Louisa married her first cousin William Carr Beresford, the illegitimate son of her uncle, the Marquess of Waterford. William was a General in the British Army, Colonel of the 16th Regiment of Foot and Governor of Jersey and had held the rank of Field Marshal in the Portuguese Army. He served in the Peninsular Wars under the Duke of Wellington and held the chief command in the Battle of Albuera, for which he was honoured with the title of Baron Beresford of Albuera on 17 May 1814. He was given the title of Viscount Beresford on 28 March 1823.

William and Louisa had no children and on his death in 1854, William's estates passed to Louisa’s youngest son, Alexander, who took the additional name Beresford from this time. It is Alexander’s signature—AJB Beresford Hope—that is on the note shown above.

The last thing I investigated was the painter of the miniature. The painting is signed Dun. Nicholas-François Dun (1764-1832)1 was a French painter who worked mostly in Naples in Italy.

I have not been able to find out anything else about this painter, but there is another portrait by him from the Metropolitan Museum of Art website shown below. As you can see, the signature is virtually identical.

There are some other paintings by Dun here.

Note
1. Sometimes Dun’s name is spelt Nicolas without the ‘h’.

Anastasius — The Novel Which Made Byron Weep! on The Regency Redingote
Rachel Knowles
Share