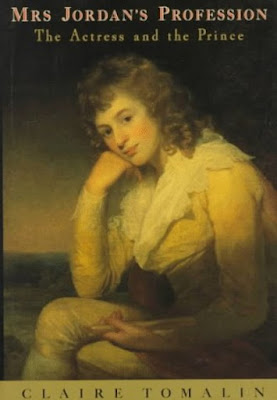 I found Claire Tomalin's biography of the great Georgian comic actress Mrs Dora Jordan  both readable and comprehensive. It tells of her rise to fame on the stage of the Theatre Royal, Drury Lane, and how she became the longstanding mistress of the Duke of Clarence, the future William IV.


Let down by the men in her life

I was particularly struck by the number of men in Dora’s life who let her down: her father, who abandoned her mother to marry an heiress; her first theatre manager, Richard Daly, who seduced her and made her pregnant; her lover Richard Ford, who did not care enough for her to marry her and prevent her from becoming the Duke of Clarence’s mistress; the Duke of Clarence, who, after living with her happily for years, abandoned her so he could make an advantageous marriage; and finally, John Barton, one of the Duke’s advisors, who failed to sort out her debts, leaving her to die in poverty abroad, away from her beloved children.

Dora and the Duke

One of the things that I learned from this book was just how uncertain Dora’s position in society was. Although she was famous in her own right as an actress, her relationship with the Duke closed doors to her that were open to her contemporary, Mrs Siddons. Dora had ten children with the Duke; the children went into society with their father, but she was not invited.


Despite his royal position, I believe that the Duke was the gainer in the relationship. As Tomalin explains, Dora preached good sense to the Duke and supported him with her earnings rather than the other way round. I found Dora’s abandonment by the Duke quite heartless and his attempt to appease his conscience by commissioning an elaborate memorial to her when he became King rather pathetic.

How Mrs Jordan got her stage name

My favourite anecdote in the book—which I had not heard before—was the story of how Mrs Jordan acquired her stage name. After escaping from her Irish stage manager, Daly, Dora started to work for Tate Wilkinson’s Yorkshire company. As she was pregnant, it was imperative that she was billed as ‘Mrs’—but Mrs what? Wilkinson made a biblical allusion, comparing Dora’s crossing of the Irish Sea to safety with his company to the Israelites crossing the River Jordan into the Promised Land. Dora liked the illusion and so the famous Mrs Jordan was born.

I borrowed this book from the library, but I would be happy to add it to my bookshelves as a detailed account of the life of an important figure in late Georgian England.
Rachel Knowles
Share