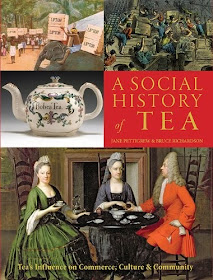 This is a comprehensive study of the growth of tea drinking in England with added sections in this new edition from Bruce Richardson about the history of tea in America. The book starts with the origins of tea and takes you through the centuries, right up to the present day with the development of specialist tea houses like Comins Tea House in Sturminster Newton, Dorset, where I bought this book.

The book is divided up by century and within these chapters, it looks at different subjects such as the sources of the tea that was drunk, the sales of tea, tea taxes, taking tea out and at home, smuggling, tea wares and how tea went from being an extremely expensive and elitist beverage to the drink of choice of the masses. I found that at times the book repeated itself in different sections and the breakdown of the chapters led to some chronological toing and froing, but overall, I found it very readable.

As you all know, my particular interest is in the Georgian period and I was impressed with the number of quotes from the household records and other contemporary sources which were included in the chapters on the 18th and 19th centuries.

I have now developed an interest in tea caddies and tea cups and look for them in the historic houses I visit. Reading this book also prompted me to visit Twinings historic shop in the Strand and the house of one of the most famous Georgian tea drinkers, Samuel Johnson.

This summer’s exhibition at Buckingham Palace gives visitors a taste of what it is like to be an official guest at the palace. Andrew and I were invited to a bloggers’ breakfast last week to view the exhibition with a guided tour by curator Anna Reynolds. We were extremely privileged to be allowed to take photos in many of the rooms—not something that is normally permitted. Thanks to Andrew, I have lots of pictures to share to help you experience a Royal Welcome. The exhibition runs until 27 September 2015.

From Wednesday 9 September, there is an additional photographic display – Long To Reign Over Us – celebrating the reign of Her Majesty Queen Elizabeth II who is now the longest reigning British monarch, overtaking Queen Victoria.

The first difference from our previous visits to Buckingham Palace was the way in. This year, visitors to the palace enter the State Rooms through the Grand Entrance that invited guests use. The Australian state coach is on display outside this entrance so that visitors can imagine they have just arrived in it (if only!).

From the Grand Entrance, you pass through the Grand Hall and up the Grand Staircase. On our tour, we went straight to the top and were able to capture the full length of the magnificent staircase. The balustrade is magnificent, made of gilded bronze, and at the top we looked up to see some very familiar faces – George III and Queen Charlotte.

In the Throne Room, there were displays on the theme of investitures. There was a video of various people receiving their honours, as well as pictures of some recipients of the Order of Merit including a portrait of Sir Tom Stoppard and a self-portrait by David Hockney. The knighting stool and a sword used for conferring knighthoods were also on display.

Preparing for a state visit

In the main exhibition area, there were several displays set up which showed how the palace staff prepare for a state visit. These included insights into the office, the kitchen, the wine cellar and the dressmaker’s workshop.

Getting ready in the office

I particularly liked the little booklets (shown above) that guests are given so that they know the names of everyone else who is attending the state banquet and where they are sitting, a menu and other useful information. The aim is to make the guests feel relaxed, not to catch them out!


Preparing food for a state banquet

Preparing the wine for a state banquet

Preparing the tableware for a state banquet


Preparing clothes fit for the Queen

Dressed for a state occasion


I enjoyed the last display, showcasing three of the Queen’s dresses used for state occasions, together with photos of her wearing them. Some of her jewellery was on display, including the coronation necklace, Queen Mary’s Dorset bow brooch and the Kokoshnik tiara.

The Ballroom was set up for a state banquet and I thought the glittering array of tableware was quite dazzling.


There were several videos to watch, my favourite being the one on the middle screen—a speeded up version of them setting up, serving and clearing up after a state banquet. You can watch part of this video here.

A selection of gifts given to the Queen on state visits was on display in the State Dining Room, on a table beneath life-size portraits of George IV and his parents and other royals.

More of the Queen's clothes were on display in the Music Room.


It was a great morning, wandering through the State Rooms and reacquainting myself with all the wonderful portraits of the Georgian royal family. I did not count how many pictures there were of George IV, but there were more of him than of any other monarch! The exhibition brought in several new elements which were a nice variation to what we had seen on previous visits.

Having blogged about Mrs Jordan (William IV's long-standing mistress) recently and how she was ostracised by the royal family during her life, it was reassuring to see her portrait on display alongside the Georgian royals as well as the Chantrey sculpture commissioned by William IV. This was not on display in one of the rooms we visited on our guided tour and so we had no opportunity to photograph it, but Andrew discovered that he had taken a picture of it quite by chance when capturing the view through a doorway from one of the drawing rooms!

One of the subjects I had to research for A Perfect Match was travel. Right at the start of my book, I needed to move Mrs Westlake and her daughter from Oxfordshire to London. Obviously they would travel by horse-drawn vehicle, but what type of carriage would they have used and how would this have been accomplished?

To help me with my research, I visited the National Trust Carriage Museum at Arlington Court in Devon and the Red House Stables in the Peak District in Derbyshire. I soon decided that the wealthy Mrs Westlake would undoubtedly have travelled by private chaise or travelling chariot:

She [Mrs Westlake] was very proud of her brand new travelling chariot which had been built to the latest design and offered the most comfortable ride that money could buy.1

What was a travelling chariot?

A travelling chariot was a privately owned post-chaise used for long journeys.

Why was it called a chariot rather than a coach?

How was it driven?

The post system enabled people to travel more quickly by refreshing their horses at different stages along the way. A traveller could hire horses and post-boys at a posting house to convey their carriage to a posting house further along the post road. This journey was known as a stage and was usually eight to ten miles long. At the end of the stage, the traveller paid off the post-boys who then stayed with the horses until they were hired by someone travelling in the opposite direction, back to the inn where they were hired.

An ostler at the second posting inn would harness a fresh team of horses to the carriage accompanied by a new set of post-boys, which would take the traveller on the second stage of their journey.

It was possible to hire a carriage as well as horses and these public travelling chariots were called post-chaises and were often painted yellow.


Travelling with your own horses

Travellers frequently covered the first stage of their journey with their own horses and postilions. These postilions would ensure that the owner’s horses were returned to their stables or wait with them for the owner’s return journey.

The very wealthy sometimes travelled with their own horses along the whole length of the journey by having horses stabled at every stage along the route.

Because a travelling chariot only had one seat and a window in front, it was ideal for sightseeing en route.

It sometimes had a dormouse boot—a system of folding panels inside the coach that allowed the passengers to stretch out their legs fully into the boot of the carriage.

Travellers could stow their belongings in the chariot’s imperials—light wooden cases covered with leather which could be carried on the roof and in the front boot.

In addition, the chariot might have a sword case which could only be accessed from the inside.

A travelling chariot was not just used for travelling long distances. After arriving in town, the chariot could have a box seat added so that it could be driven around town by a coachman.

Behind the main body of the carriage, above the boot, was an outside seat called a rumble seat which could be used for transporting servants. This could be removed so that footmen could stand on the footboard behind the carriage when it was used around town.

The windows could be covered over with screens or shutters in order to shut out the light and allow the passengers to sleep and maintain their privacy. The different screens could be lowered and raised as required.

Note
(1) Excerpt from A Perfect Match by Rachel Knowles.