Why did Regency lovers elope to Gretna Green?

If you’ve read many Regency romances, then you are probably familiar with the notion of couples eloping to Gretna Green. But why did couples need to go all the way to Scotland to get married?

The problem of irregular marriages

It all started with Hardwicke’s Marriage Act of 1753. Before this Act came into force, although most people were married in church and subject to the rules laid down by the Church of England, this was not legally necessary.

According to the Church’s rules, marriages had to take place in the church of the parish where one or both people getting married were living. Either banns had to be read—that is, the intention to marry had to be publicly announced in the church prior to the wedding—or the couple had to procure a license to marry.

However, as long as the marriage was conducted by an Anglican clergyman, it was still legal, even if all the other conditions were not met!


As a result, there was a roaring trade in irregular marriages, particularly at the Fleet Prison in London, where imprisoned clergymen were happy to marry couples at any time of day or night, provided the price was right.

Another popular, but not quite so disreputable location, was St George’s Chapel, Hyde Park Corner, which seems to have been built for the express purpose of conducting irregular marriages. According to the marriage register of St George’s Chapel, an incredible 61 couples were married on 24 March 1754, eager to escape the restrictions that would be imposed by Hardwicke’s Act which came into force the following day (1).


Hardwicke’s Marriage Act was devised to put a stop to these irregular marriages.

The Act required that:
• All marriages had to take place in the parish church of one of the parties getting married and be performed by the minister of that church.
• All marriages had to take place in a public ceremony.
• All marriages had to take place during daylight hours.
• Anyone under the age of 21 wanting to get married had to have parental consent. Formal consent had to be given before a marriage license could be issued and an objecting parent had the right to forbid the banns. However, if the banns were read without challenge, it did not make the marriage illegal even if the parents were against the marriage.
• Marriages could only take place after giving three weeks’ notice of the intention to marry, that is, the banns being read in the parish church for three times before the wedding took place. Marriages without banns required a marriage license. This was more expensive and could only be acquired from a bishop or archbishop.

These rules made it virtually impossible for those under 21 to be married without their parents’ permission.

But crucially for the Gretna Green story, Hardwicke’s Marriage Act only applied in England and Wales. It did not apply in Scotland. The Scottish government was encouraged to adopt the same law, but it did not. 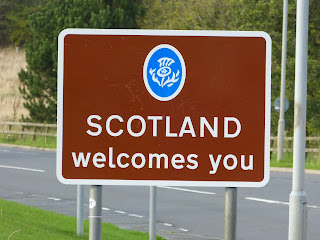 It was still possible for those aged under 21 to be legally married in Scotland without their parents’ permission. In fact, Scottish law allowed boys as young as 14 and girls as young as 12 to be married. No parental consent was required and the marriage did not have to be consummated to be valid.

By travelling into Scotland, underage lovers from England could still get married without parental consent.

Another group of people who took advantage of the more relaxed marriage laws in Scotland were Dissenters. There were special dispensations for Jews and Quakers, but not for non-conformists and some chose to make the journey to Scotland rather than get married in a Church of England church. 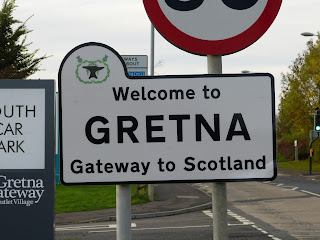 Graitney, more familiarly known as Gretna, was the first village in Scotland on the main post road from London. The blacksmith’s shop was ideally located as one of the first buildings that an eloping couple came to.

All that was required for a marriage in Scotland to be legal was a declaration in front of witnesses. Couples arriving at the blacksmith’s shop in Gretna Green were married by a self-appointed ‘anvil priest’ – not a clergyman, but an entrepreneur who could see that conducting runaway marriages was big business. As the eloping couples were typically rich and in a great hurry to be married, the anvil priest could charge whatever he liked and the couple would probably pay.

One of the most famous marriages to take place at Gretna Green was between Sarah Anne Child and John Fane, 10th Earl of Westmorland, which took place on 20 May 1782. Sarah Anne’s father, Robert Child, chased the couple all the way to Scotland, but failed to prevent the marriage. He was so angry that he cut his daughter out of his will, determined that no Earl of Westmorland should benefit from his wealth. As a result, his fortune passed to his eldest granddaughter, Sarah Child Villiers, Countess of Jersey.

Sources used include:
Armytage, George J, The Register of Baptisms and Marriages at St George's Chapel, May Fair (1889)
Clinch, George, Mayfair and Belgravia: being an historical account of the parish of St George, Hanover Square (1892)