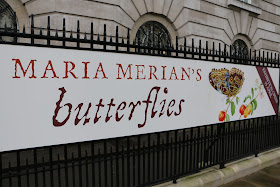 You can read my blog about the Scottish Artists exhibition here.

I confess that I wasn’t at all sure that I would be interested in Maria Merian’s work. After all, she was born around 100 years too early for me and died just three years into the reign of George I. However, I knew that the pictures on display had all been acquired by George III and so I had my Georgian connection. I prefer paintings of people and places rather than plants and animals, but I have to admit that Merian’s work is stunning.

Maria Sibylla Merian was born in Germany but later settled in the Netherlands. Encouraged by her step-father, Jacob Marrel, she became a skilled artist, specialising in painting plants and insects. But Merian was not just an artist. She had an enquiring, scientific mind and wanted to know more about the insects she was painting. Metamorphosis was little understood at the time and she bred insects so that she could observe their lifecycles and documented what she saw in meticulously accurate paintings.


In 1699, Merian travelled to Suriname in South America with her daughter Dorothea so that she could study insects in their natural habitat, selling her own paintings in order to finance the voyage. She had hoped to stay for five years but was forced to return to the Netherlands in 1701 due to ill health. She published the results of her observations in Metamorphosis Insectorum Surinamensium (The Metamorphosis of the Insects of Suriname) in 1705, in Latin and Dutch, and it became an important source for Georgian scientists.

The book was full of prints of her incredibly detailed life-size paintings, illustrating the different stages of the lifecycles of various caterpillars. Some copies were in black and white; others she hand-coloured with utmost accuracy.

She financed her self-publishing venture by producing luxury prints of her paintings. There are only two sets known to be in existence – Hans Sloane’s set which is now in the British Museum and the set in the Royal Collection. These were acquired by George III some time before 1810 when they appear in a royal inventory. Many of these prints were on display in the exhibition.

The copy of Metamorphosis Insectorum Surinamensium on display was acquired by William IV for the royal library. The curator explained how this copy was particularly exclusive because it was a counterproof version. As I understand it, this means that a print was made from the plate and then this print was immediately used to make another print. The result was a faint but exact copy of the original, without print marks, which would then be finished by hand. This made it a very expensive luxury product.

As well as insects, Merian painted watercolours of frogs, showing their lifecycles, and a few other creatures such as the Cayman crocodile.

One treat that I almost missed was in the Millar Learning Room, which you can find to the left of the entrance stairs. There was a touchscreen showing a picture of a branch with several different caterpillars on it from Merian’s watercolours. Touching one of these caterpillars started a short animation of the lifecycle of that caterpillar, using Merian’s illustrations. My husband took a short video of one of these animations.