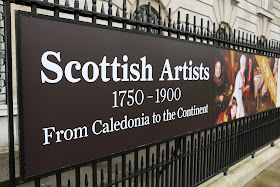 You can read about Maria Merian’s Butterflies here.

The best collection of Scottish Art outside of Scotland

The first room was dominated by the work of two major Scottish artists of the Georgian period: Allan Ramsay and Sir David Wilkie.

Allan Ramsay (1713-1784) was born in Edinburgh and was patronised by George III, having been introduced to him by fellow Scotsman, Lord Bute. He was commissioned to paint the state portrait of George III in his coronation robes—a picture with which I am very familiar. Part of the reason for this is no doubt that there are a lot of copies of this portrait around. It was reproduced more than 150 times by Ramsay for members of the royal family, courtiers and the like. The curator assured us that it was the prime version of the state portrait which was on display.

Alongside the state portrait of George III was a picture of his wife, Queen Charlotte, in a less formal setting, with the toddling George IV by her side and his younger brother Frederick, Duke of York, balanced on her lap. The young George, Prince of Wales, aged about two, could be mistaken for a girl as he is wearing a long dress. This is because at this time, boys wore dresses or ‘coats’ until the age of around four to seven when they were breeched, that is, put into trousers for the first time. I love the way that George is pictured with one hand on his hip and a bow in the other.

On an adjacent wall were three more Ramsay portraits including a charming one of William IV as a small boy before he was breeched playing a drum bearing his father’s royal cipher.

Born in Fife, Sir David Wilkie (1785-1841) rose to even greater fame than Ramsay had done. George IV appointed Wilkie as His Majesty’s Painter and Limner in Scotland in 1823 and then Principal Painter in Ordinary to the King in 1830, before knighting him in 1836.

Two of Wilkie’s early royal commissions were on display—Blind-Man’s Buff and its companion piece, The Penny Wedding—together with a number of later works that he had painted on the continent.

My favourite Wilkie piece was undoubtedly The Entrance of George IV to Holyroodhouse. The painting depicts George IV’s arrival at Holyroodhouse Palace on 15 August 1822 during his tour of Scotland—a significant visit as he was the first reigning monarch to travel north of the border for almost two hundred years. This picture reminded me that George IV did occasionally get things right as his Scottish tour was a great success!

As usual, I was looking at the exhibition from a Georgian point of view and was glad to spot a few earlier pieces in the room, including Ruins of the Abbey of Holyrood (above), painted by David Roberts in 1823, and a wonderfully detailed painting of Georgian Edinburgh—View of the High Street Edinburgh and the Lawn Market (below)—painted by Alexander Nasmyth (1758-1840) in 1824.

There were also several paintings by Wilkie. I loved his painting of Queen Adelaide with Princess Victoria and Members of Her Family showing the 11-year-old Queen Victoria’s first court appearance at St James’ Palace on 24 February 1831.

A later Wilkie showed another momentous occasion in Queen Victoria’s life—The First Council of Queen Victoria on 20 June 1837, shortly after becoming Queen. Unfortunately, Queen Victoria did not like the picture and Wilkie fell out of royal favour.

Amongst the Victorian miniatures in one of the side rooms, I spied a couple of Georgian princesses: Princess Elizabeth and Princess Sophia. They were both painted in 1807 by Andrew Robertson (1777-1845) who was Miniature Painter to the princesses’ brother, Augustus, Duke of Sussex.

Tables, marbles and an amazing clock

The main exhibition rooms also had several items of furniture and sculpture on display. These included a pair of pier tables and a writing table supplied to the Palace of Holyroodhouse in 1796; a marble bust of Adolphus, Duke of Cambridge, 7th son of George III; and the most incredible pedestal clock.

The clock was made by John Smith of Fife c1800-1808 and was exhibited by him in London in 1808. It was both an automaton and a musical clock with a choice of 16 tunes to play and two sets of figures—the higher one of the royal family and the lower one of members of the royal household—who would promenade across one face of the clock every three hours.

Don’t forget to pick up a media guide for the exhibition if you are visiting. By selecting the section on the clock it is possible to see the clock in full operation with its music playing and its figures processing around the clock.

Scottish Artists 1750-1900: From Caledonia to the Continent is on at the Queen’s Gallery, Buckingham Palace, London, alongside Maria Merian’s Butterflies, until Sunday 9 October 2016.
Rachel Knowles
Share