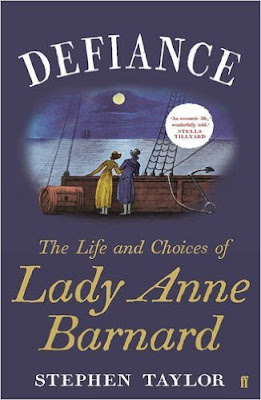 A well-written biography of an unconventional Georgian lady


Defiance is the biography of Lady Anne Barnard (1750-1825), best-known as the author of the popular ballad Auld Robin Grey. Anne was the daughter of an impoverished Scottish earl who became close friends with the young George IV and his secret wife, Mrs Fitzherbert. Anne was a prolific letter writer and kept detailed journals of her life, most notably of her time living in the Cape of Good Hope in South Africa.

Defiance is a well-written biography, as you would expect from a former correspondent of The Times, with plenty of contemporary quotes, largely from Anne’s letters and diaries. If you want to learn about one of the less conventional members of Georgian high society, then this biography will not disappoint.

Who was Anne Barnard?

Before I was invited to review this book, I confess that I had no knowledge of Lady Anne Barnard, or Lady Anne Lindsay, as she was known before her marriage. Although an intimate friend of George, Prince of Wales, and his secret wife, Maria Fitzherbert, I couldn’t remember ever hearing her name mentioned before. I had heard of many of her suitors, who included Thomas Noel, 2nd Viscount Wentworth; Henry Dundas, 1st Viscount Melville; and William Windham, but not of Anne or her husband.

The fact that I had never heard of Anne’s husband, Andrew Barnard, is not surprising. Despite proposals from much wealthier and more powerful men, Anne chose to marry for love. After refusing numerous offers for her hand, including one from the eminent politician Henry Dundas, Anne chose to marry a nobody. Barnard had neither wealth nor connections to recommend him and her choice surprised everyone. He was deemed an opportunist by many, but the marriage was a happy one.

That I had not heard of Anne is more surprising. She is mentioned in Fanny Burney’s diaries, so I must have read her name, but she had clearly not made much of an impression. One reason is probably the fact that she didn’t quite fit into high society. Many of the leaders of the ton thought Anne was ‘odd’. Another is undoubtedly that many of Anne’s papers have not been available to historians, and this is one of the exciting claims of this book, that Taylor was able to use Anne’s unpublished memoirs in his research.


The peril of indecision

As a young woman, Anne earnt a reputation for being coquettish, largely through being both attractive and indecisive. Her crime was not wanting to hurt people’s feelings and desperately wanting to marry for love. She did not let society dictate how she acted and her friendships with the scandalous Anne Luttrell, the wife of the Duke of Cumberland, and Mrs Fitzherbert did nothing to improve her reputation. Neither did her relationships with Wentworth and Windham.

It was Anne’s relationship with Mrs Fitzherbert that most attracted me to the book and, for me, it was the most satisfying part of Anne’s story. I felt I learnt something more of George IV’s secret wife, and have ended up feeling that she was more to blame that their relationship didn’t last than I had hitherto believed. Eager for new information about Mrs Fitzherbert and aware of Anne’s role as her travelling companion and confidante, I had hoped for even more. I was left wondering whether the author was forced to be selective or whether there is little more to tell from Anne’s papers about the royal couple.

There were times in the narrative that I found the style a touch too impersonal – maybe, a little journalistic and matter of fact. Perhaps this accounted for why I struggled to sympathise with Anne’s character, and didn’t feel I really knew her very well by the time I finished the book, though I think this improved when I went back to take notes.

I most warmed to Anne’s character towards the end of the book, when, as a relatively wealthy widow, she shared her home with members of both her own and her husband’s family. Perhaps her most endearing action, though probably the most daringly controversial act of her life, was giving a home to her husband’s illegitimate, mixed race daughter Christina, the daughter of an African slave, whom Anne housed and supported, even though her very existence was testimony to her husband’s infidelity.


The part that I found most hard going was the section on Anne’s life in the Cape, but this was probably personal. As my primary area of research is late Georgian England, my interest in South Africa is limited, and I was eager for Anne to get back to England.

I think it would have been helpful to include a family tree, to enable the reader to keep up with all of Anne’s relations.

One of my gripes is about titles. On one occasion, Frances Villiers, Countess of Jersey, is referred to as Lady Frances Jersey. Though tempting to distinguish her from her equally famous daughter-in-law Sarah by inserting her Christian name, according to the rules governing titles, this is not correct. Lady Jersey took her title from her husband – using her Christian name before her title would indicate that it was a courtesy title she used due to the rank held by her father.

This was the case with Lady Anne Barnard. She took her title from her father and so when she married a commoner, she continued to use her courtesy title with her Christian name and her husband’s surname, indicating that the source of her title was her father and not her husband.

My second observation is about the date of Lady Anne Lindsay’s marriage to Andrew Barnard. Defiance gives the date as 30 October 1793, but the Oxford Dictionary of National Biography for Lady Anne Barnard gives the date as 31 October. So, which is right? Dates can be tricky. It is sometimes difficult to pinpoint exactly when someone was born or died before registration of births and deaths became compulsory in 1837. Parish registers only recorded the dates of baptisms and burials. However, marriages are easier. I decided to check as I have access to a transcription of the marriage registers of St George’s, Hanover Square. The marriage is recorded as taking place on 31 October 1793.

In conclusion, Defiance is a readable biography of a daringly unconventional Georgian woman, full of detail about life at the Cape around 1800, and with some fresh insights into Mrs Fitzherbert’s relationship with the young George IV.

I was sent a review copy by the publishers but this is an independent review.