Jane Austen - The Secret Radical by Helena Kelly - a review 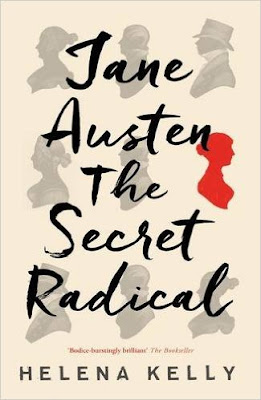 Consider carefully before you read this book!

If you are happy reading Jane Austen’s novels as the Regency era love stories that I have always believed them to be, then don’t read this book. It might help you to understand some of the influences that affected Jane’s writings which might lead to a greater enjoyment of her work, but it is also possible that you might not like everything you discover. If you take all Kelly’s ideas seriously, this book could completely undermine the way that you look at some of Jane’s plots and characters.

Why did I read this book?

I love Jane Austen’s novels and I know something of Jane’s life and period. I certainly ought to, as one chapter in my new book (What Regency Women Did For Us) is given over to my favourite author! However, I am not a literary critic and have never sought to pull Jane Austen’s novels to pieces in search for greater meaning. I accepted this review copy on the basis that it promised new insights into the novels through greater knowledge of the period in which Jane Austen wrote. As a Regency historian, I decided to hear what Kelly had to say.

The book opens with a chapter entitled ‘The Authoress’. An interesting decision to use the word ‘authoress’ rather than ‘author’. After all, Pride and Prejudice was originally described as being ‘by the author of Sense and Sensibility’1 not the authoress.

This is followed by a chapter devoted to each of Jane’s novels and a final one looking at her death. Each of these chapters begins with a fictional section based on one of Jane’s letters which helped set the theme for the chapter. Although I found the book readable in style, I did not like all the content!

Kelly argues that Jane’s novels are much more than love stories – they are revolutionary and tackle subjects which would have been seen as highly controversial at the time they were written. Different chapters look at subjects such as the failure of men to provide for their female relatives, the corruption of both the clergy and the nobility, the slave trade, and poverty and the corn laws.

Though I am ready to accept that Jane was highly influenced by the times in which she wrote, I remain unconvinced that she wrote just to be radical, dressed up in a story. To challenge and instruct as well as entertain maybe, but I personally still believe she was first and foremost a storyteller.

More than a mock Gothic novel?

Although I have read The Mysteries of Udolpho (you can read my guide to it here), I can’t say I know it very well, therefore I appreciated Kelly pointing out that the links between Mrs Radcliffe’s Gothic novel and Northanger Abbey were even stronger than I had realised. Jane’s original readers would have seen all the parallels that the modern reader misses, and these would have been even stronger if the book had been published straight after it had been written, rather than years later, after Jane’s death.

However, Kelly lost me completely when she started suggesting that all the bedroom scenes in Northanger Abbey had sexual connotations. I prefer to leave Northanger Abbey as a clever play on the Gothic novel.

The irresponsibility of men?

In the chapter on Sense and Sensibility, Kelly suggests that Jane was indirectly criticising the men in her family for failing to provide adequately for the women who were dependent on them – Jane, her sister Cassandra, and their mother. I already knew how hard Jane had found it when her father suddenly decided to give up the living at Steventon and uproot his family from the only home they had ever known and settle them in Bath, but I had never really considered the alternative. Kelly writes that Jane’s father need not have given up the majority of his income to his eldest son – who, by the way, already had the means to support himself – but could have hired a curate to help him and retained most of the income to support his wife and daughters. Another question that I had never asked was why, after the death of Jane’s father, it took Jane's rich brother Edward Knight four years to offer his mother and sisters a permanent home.

However, I found little sympathy with Kelly when she began trying to read sexual meanings into Edward Ferrars’ behaviour and implied he was no better than Willoughby. It certainly does not help me enjoy the novel better. Edward might not be a Darcy, but he is a man who has been downtrodden by his mother, and if Eleanor loves him, who are we to question her choice? Despite what Kelly suggests, I retain my right to believe that Edward and Eleanor could live happily ever after.

Hidden depths to Pride and Prejudice

Pride and Prejudice is my favourite book and I dare anyone to spoil it for me! Fortunately, Kelly does not try to undermine the characters of Darcy and Elizabeth, but rather draws attention to the underlying prejudices of the novel which are far more revolutionary than a modern audience appreciates.

In Jane’s time, there were deep-rooted prejudices in favour of the nobility and the clergy. Pride and Prejudice undermines both, in the persons of Lady Catherine de Bourgh and Mr Collins. Could Lady Catherine really be a sensible person to appoint Mr Collins to the living at her disposal and then actually welcome his irksome company? When the contrast is drawn between the noble Lady Catherine’s behaviour and Elizabeth Bennet’s aunt and uncle, the Gardiners, who are in trade, the reader’s conclusion is inevitable: good breeding has nothing to do with titles.

More in a name

Mansfield Park has always seemed a more serious book to me than Jane’s other novels, but I had not made the connection between the names used in the book and the campaign for the abolition of the slave trade. The very name of the book – Mansfield Park – links the book to Lord Mansfield whose judgement ‘removed the practical basis’2 on which slavery rested, and the hated Mrs Norris shares her name with a notorious slave trader.

When Kelly is discussing Willoughby’s visit to the Dashwoods in Sense and Sensibility when he believes Marianne to be dying, Kelly states that Willoughby ‘turns up at what he thinks is Marianne’s death-bed intoxicated (“yes, I am very drunk”)’3, quoting Willoughby’s own words. However, she totally disregards his next words – ‘A pint of porter with my cold beef at Marlborough was enough to over-set me’4 – indicating that Willoughbly was being sarcastic and most definitely in his right mind and not drunk.

Kelly also talks of Edward Ferrars’ education and writes “Why send him to Exeter?”5 But surely it was not Exeter where Edward was educated but at Longstaple near Plymouth at the house of Lucy Steele’s uncle, Mr Pratt.

My final gripe is about earls. When discussing titles in the chapter on Pride and Prejudice, Kelly refers to Lady Catherine de Bourgh as the daughter of an earl and claims “there are no more than a handful of them in England.”6 An earl is indeed the third highest title in the British peerage after duke and marquess as Kelly states, but whilst there were less than 20 English dukedoms and a similar number of marquessates at the start of the Regency, there were decidedly more than a handful of earls. According to Debrett’s, there were about 90 English earldoms alone at the start of the Regency – a very large handful!7

There are many more comments I could make on this book which, in my opinion, is a mixed bag of fascinating insights and unhelpful suggestions that I could have done without. You may discover, as I did, some real gems that take you closer to Jane’s world, but if you love Jane’s novels as the love stories they are, then you might not want to take the risk!