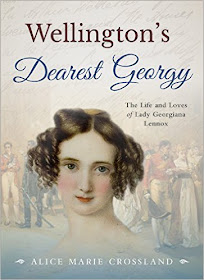 Who was Wellington’s ‘dearest Georgy’?

Every Regency historian has heard of the Duke of Wellington, but who was his ‘dearest Georgy’? In this new biography, author Alice Marie Crossland paints an engaging picture of the little-known Lady Georgiana Lennox and her intimate friendship with Arthur Wellesley, 1st Duke of Wellington.

Lady Georgiana Lennox (1795-1891), known to her close friends as Georgy, was the third daughter of Charles Lennox, 4th Duke of Richmond, and his wife, Lady Charlotte Gordon. As well as her relationship with Wellington, Georgy’s other claim to fame is that her mother, the Duchess of Richmond, held a celebrated ball in Brussels on the eve of Waterloo.

A charming tale of friendship and romance

Georgy’s story appealed to me on many levels, not least because it had a happy ending. Crossland depicts Georgy as a vivacious, highly sociable lady who became the close friend of the Duke of Wellington when she was only a girl. It was an intimacy based on a shared wit and sense of humour and one that was deep enough to lead Wellington to give Georgy a miniature of himself on the eve of Waterloo.
Perhaps if the Duke of Wellington had been unmarried, Georgy, although some 26 years his junior, would have become his duchess. As it was, their relationship appears to have remained platonic, and Georgy watched as his mistresses came and went, whilst she retained a special place in Wellington’s heart.

The combination of Georgy’s infatuation with Wellington combined with the impoverished state of her family’s finances meant that Georgy struggled to find a husband. It was not until she was nearly 30 that she eventually fell in love and married. Her husband was William Fitzgerald-de Ros, a man whose elder brother Henry repeatedly scandalised society with his behaviour which included the disgrace of cheating at cards.
As the third son, William never expected to inherit the title, but after the death of both his elder brothers, he became 23rd Baron de Ros. William and Georgy had a happy marriage that lasted almost 50 years.

Crossland had a distinct advantage when writing this biography – the full support of Lady Georgiana Lennox’s descendant, Peter Maxwell, 28th Baron de Ros, who gave her access to the family papers.

Though perhaps not as technically well-written as the biography of another Regency-era woman that I read recently (Defiance - The Life and Choices of Lady Anne Barnard), I confess that I enjoyed this one more. Part of this was due to Crossland’s passion for her subject which spilled over into her writing.

I found the front cover of the book very appealing. My copy was a hybrid between a paperback and a hardback – a double carboard cover that gave a nice feel to the book although technically it was still a paperback. I feel, however, that some of the internal presentation let the book down. Little things, like having page numbers on the title page and blank pages, inconsistent gaps around dashes and hyphens, and speech marks that were formatted inconsistently.

The story was interesting and engaging, but it would have benefitted from additional editing. A few inconsistencies and inaccuracies crept into the text that tighter editing would, hopefully, have noticed. I know how hard it is to get all the facts right. I have just written my first history book (What Regency Women Did For Us) and I freaked out when I discovered a couple of glaring errors at the final proofreading stage.

I don’t think that it is fundamental that Georgy would have been 11 years old rather than 9 when her father became duke as stated in the text. Nor is the inconsistent representation of the character of Georgy’s husband, William Fitzgerald-de Ros. When he is first introduced into the story, William is described along with his brother Henry as being a hard-drinking, womanising man, but later Crossland draws a sharp contrast between the wild Henry and his reliable brother William.

I was, however, somewhat surprised to read that Georgy and her sisters were presented at court in 1813 and that her sister Sarah had dialogue with George III. Why? Because this was during the Regency and the mentally unstable king would have been shut up in Windsor Castle by this time.

I have some sympathy with the author as I followed her notes to the source – A Sketch of the Life of Georgiana, Lady de Ros, by her daughter, Blanche Swinton. Crossland was perpetuating someone else’s error. It is a warning to all us historians not to take everything we read as fact. I wrote a blog post about an illustration of a ball at Almack’s that was dated 1815 and how it just could not be correct. Although it was reasonable to assume that Georgy’s daughter knew what she was writing about, the dates had clearly got muddled, and a little sense checking would have revealed her mistake. Having a beta reader or editor who is familiar with your period of history helps eradicate errors like this.

I don’t know how many reviews look at a book’s index, but for a non-fiction book, this is an important area. If a historical biography is going to be a useful research tool, it needs to have a good index. I hope I never want to look up anything specific in this book in the future as the index is not very helpful. Not even the bigger entries like those for Georgy and Wellington are broken down into any sub-sections – not very user-friendly.

An enjoyable read about Regency life

In conclusion, I found Wellington’s Dearest Georgy an enjoyable read about Regency life which would have been even better with some additional editing.

Sources used:
Crossland, Alice Marie, Wellington's Dearest Georgy - The Life and Loves of Lady Georgiana Lennox (Universe Press, 2016)
Swinton, Blanche, A sketch of the life of Georgiana, Lady de Ros: with some reminscences of her family and friends, including the Duke of Wellington (1893)