The Royal Mews at Buckingham Palace 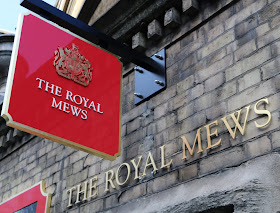 What is the Royal Mews?

The Royal Mews is a department of the Queen’s household and is responsible for all travel by road undertaken by the Queen and her family. It houses the Queen’s carriages and carriage horses as well as a fleet of cars.


The history of the Royal Mews

The King’s Mews goes back to the 14th century when Richard II was on the throne, and was originally at Charing Cross, where the National Gallery is now. It was the place where the king kept his falcons and the name mews comes from the falcons mewing, that is, moulting. Henry VIII rebuilt the mews as stables in 1534 but kept the name ‘mews’ and it has been associated with horses ever since.

The Royal Mews at Buckingham Palace


In 1761, George III bought Buckingham House for his wife, Queen Charlotte. He commissioned the building of the Riding School, which is the oldest part of the Mews. It was designed by the architect Sir William Chambers and built in 1765-6.

After George IV succeeded to the throne in 1820, he decided to rebuild Buckingham House and make it his royal palace. The Royal Mews was built in 1822-5 and was designed by the architect of Buckingham Palace, John Nash. Unfortunately, the foundations were faulty, there was a drainage problem, and the original building work was shoddy so that it was constantly under repair.

Nash built the Doric-style arch topped with a clock tower leading into the quadrangle of the Mews, but the pediment carving portraying the tale of Hercules catching Thracian horses was added later, in 1859.

The Master of the Horse


Built in 1830 for the Duke of Cambridge, it was used by his family before being sold to the 9th Earl of Albermarle. The earl converted it into a semi-state landau before giving it to Queen Mary in 1920.

Used to take the crown to the Houses of Parliament for the state opening of parliament.

Originally built in Dublin in 1803-4, the Irish State Coach was bought by Queen Victoria after seeing it at an exhibition in 1852.


A gift to the Queen from the people of Australia, this coach is normally on display in the Royal Mews, but is currently part of the 2017 exhibition at Buckingham Palace, Royal Gifts, until 1 October.


Used by many royal brides to travel to their weddings including Lady Diana Spencer in 1981.


This coach is a travelling time capsule. It is full of historical artefacts including a hollow crown on its roof made from wood from HMS Victory and a digital copy of the Domesday book.


The Gold State Coach is on display in the former State Carriage House. It was commissioned by George III, and was first used by the king to travel to the House of Lords to open parliament on 25 November 1762. Despite appearances, the coach is not made of gold, but is gilded all over, with external panels painted by Giovanni Battista Cipriani.

The coach has been used for every coronation since that of George IV in 1821. There is a frieze around the walls showing William IV’s coronation procession in 1831, painted by Richard Barrett Davis (1782-1854).


The State Stables have a replica landau that visitors may sit in to get an idea of the suspension (or lack of it) in a royal carriage. There are also opportunities here to dress up as a footman and learn how to harness a horse.


The stables house the Queen’s carriage horses including the Queen’s famous Windsor Greys and Cleveland Bays.