The Real Persuasion by Peter James Bowman – a review 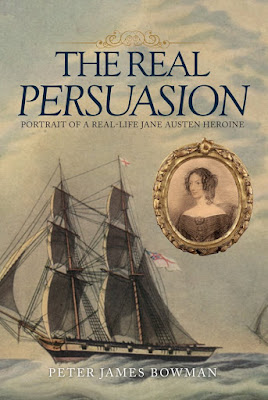 Did Anne Elliot live happily ever after?

Are you a fan of Jane Austen’s Persuasion? Have you ever wondered what happened to Anne Elliot after she married Captain Wentworth? Judging by the huge popularity of Austen variations, it would seem that many people have. The Real Persuasion is not an Austen variation, but it does describe what Anne’s life might have looked like after her marriage by telling the true story of Katherine Bisshopp, a real-life Regency heroine whose life bore remarkable similarities to that of Anne Elliot.

Anne Elliott was the daughter of Sir Walter Elliot of Kellynch Hall, an impoverished baronet. Katherine was the daughter of Sir Cecil Bisshopp of Parham in Sussex and like Anne, she too was forced to quit her home because of lack of money. Katherine’s father squandered great sums of money proving his lineage in order to claim the barony of Zouche, which he did successfully in 1815, only to run out of money two years later. Sir Cecil sold the contents of Parham and shut it up; Sir Walter was forced to rent out Kellynch Hall and go to Bath.

Both Anne and Katherine fell in love with naval officers but were unable to marry. Lady Russell believed Captain Wentworth was unworthy of Anne and persuaded her to break off her engagement. Katherine sought in vain for her parents’ consent to her marriage to George Pechell.

Both Anne and Katherine had to wait a long time to marry the man of their choice. Anne waited eight and a half years; Katherine three years longer. Despite George’s promotion to captain and his improved fortunes since he first sought Katherine’s hand, it seems that her family still did not think him good enough. It was not until Katherine was in her early 30s that her parents finally caved in on the grounds that otherwise she would end up marrying no one.

Both women also had invalid sisters, though Anne’s sister Mary Musgrove was more querulous than Katherine’s sister Harriet. I also think that Harriet was more genuinely unwell than Mary ever was. I wondered from the accounts of her illness whether she might have suffered from chronic fatigue.

Did Katherine’s story end happily? Mostly. Katherine and George loved each other for the rest of their lives. George was made a vice-admiral and inherited a baronetcy. They leased and then bought Castle Goring as their home and had three children. But their lives were not without sadness. Katherine and George were devastated by the death of their only son, Captain William Pechell, who was killed in Sebastopol whilst serving his country.

This is a well-written story that draws heavily on original sources – letters and journals – which are widely quoted in the text. I love primary sources and this makes the book very exciting reading for me, even without the story that goes with it.

There is a handy timeline at the back and some lovely plates in the middle. A family tree might have been useful for keeping track of the different family members.

For me personally, I found the passages at the end of each section detailing the correspondences with Persuasion detracted from the story. As someone who knows Persuasion well, I had no difficulty in seeing the similarities as the narrative progressed and stopping to spell them out spoilt the flow of the story a little. I would have preferred it if they had been gathered up into a single comparison section at the end, but for someone who is less familiar with Persuasion, the ongoing comparison might be more helpful.

If you love Persuasion like I do, I am sure that you will be fascinated by the amazing similarities between the stories of Katherine Bisshopp and Anne Elliot and see Katherine’s story as one way that Anne’s might have worked out.