A Regency History guide to dukes, marquesses and other titles

The trouble with titles


Although Jane Austen rarely wrote about the aristocracy, many of today's Georgian and Regency romances typically include a fair smattering of peers. In the same way, most Georgian biographies are about peers or their families or those who have at least some interaction with them. The trouble is, I have come to realise that titles are like apostrophes – a lot of people use them wrongly. Some people care as little about getting titles right as they do about apostrophes. I am not one of those people. (And I do care about apostrophes being used correctly too.)

I picked up most of the basic rules for using peers’ titles whilst researching for blog posts and books but having come across some titles recently that I thought were used wrongly, I decided to revisit the subject. This blog is the result of my research. I have limited the scope of this blog to how you would refer to a peer and the members of his family in narrative.

I have written a separate post about titles for married daughters of peers which you can read here.

There are five different ranks in the British peerage: dukes, marquesses, earls, viscounts and barons. Baronets are hereditary titles but are not members of the peerage.

Typically, a duke has various other titles besides his dukedom. His eldest son takes the rank of a marquess – the next grade down of the peerage – but his courtesy title will depend on the other titles that his father has at his disposal. He takes the highest of these as his courtesy title eg the heir to the Duke of Devonshire takes the title of the Marquess of Hartington whereas the heir to the Duke of Norfolk takes the title of the Earl of Surrey.

This designation does not make him a peer (so he cannot sit in the House of Lords) but in every other respect this title is treated in the same way as if he were a member of the peerage.

These rules also apply to the eldest sons of marquesses and earls but not to those of viscounts even if they have a barony as well. If a duke, marquess or earl does not have a subsidiary title, his eldest son uses the family name as his courtesy title.

Note that it is only direct heirs that are entitled to use a subsidiary title, so if the duke’s heir is, for example, a cousin, rather than a son or grandson, he will not have a courtesy title.

A duke’s title always relates to a place and not his family name eg The Duke of Richmond rather than the Duke of Lennox.

Let us use the fictitious example of George Hampton, Duke of Wessex, to illustrate. The duke would be formally referred to as His Grace, the Most Noble Duke of Wessex.1 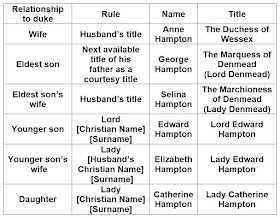 When a duke’s daughter marries, her title will depend on the status of her husband. I am writing a separate blog post on titles of married daughters of peers.

Either marquess or marquis can be used for this title. I am choosing to stick to the older, British designation of marquess. 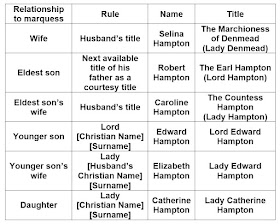 Let us use the fictitious example of Robert Hampton, Earl Hampton, to illustrate. The earl would be formally designated The Right Honourable The Earl Hampton but would normally be referred to as Lord Hampton. 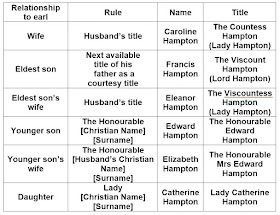 
The title of viscount may be taken from a place name or a family name. The preposition ‘of’ is only used between the style and the title in the names of some Scottish peers.

Let us use the fictitious example of Francis Hampton, Viscount Hampton, to illustrate. The viscount would be formally designated The Right Honourable The Viscount Hampton but would normally be referred to as Lord Hampton.

The title of baron or baroness may be taken from a place name, a family name or something else.

Let us use the fictitious example of James Hampton, Baron Hampton, to illustrate. The baron would be formally designated The Right Honourable Lord Hampton but would normally be referred to as Lord Hampton.2 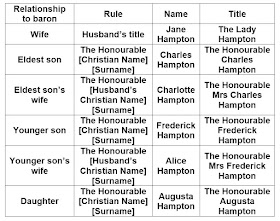 Baronesses and other peeresses in their own right

There are some peerages which descend in the female line. These are mostly baronies. The husband of a peeress in her own right takes no title from his wife but the children are treated in the same way as if their father possessed the title.

I have interpreted the rules to the best of my ability but please send me a message if you think I have got something wrong in case I have made a mistake.

Sources used include:
Black, Adam and Charles, Titles and forms of address - a guide to their correct use (9th edition)(1955)
Debrett, John, The Peerage of the United Kingdom of Great Britain and Ireland (1820)

Laura Wallace’s excellent website which you can find here.