Eleanor Coade (3 June 1733 – 16 November 1821) was a Georgian businesswoman who successfully ran an artificial stone manufactory in London. There are many examples of Coade stone which still exist today including the King’s Statue, Weymouth. You can read more about Eleanor Coade and eleven other inspirational Georgian women in my book: What Regency Women Did For Us. 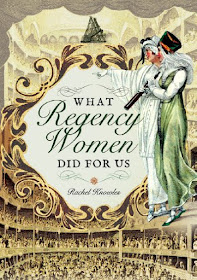 Available from Amazon here: What Regency Women Did for Us


Eleanor Coade was born on 3 June 1733 in Exeter, Devon. She was the daughter of George Coade, a wealthy, non-conformist wool merchant, and his wife, Elizabeth Enchmarch. Eleanor had a younger sister, Elizabeth. In 1759, the family fortunes changed when George was declared bankrupt and they relocated to London.


By 1766, Eleanor, still unmarried, was operating as a linen draper. Three years later, seemingly unaffected by her father’s second bankruptcy, she bought an artificial stone manufactory situated at King’s Arms Stairs, Lambeth. Eleanor’s factory could produce in artificial stone almost anything that could be made in real stone, but at a cheaper price. Her products included decorative wall panels, vases and statues. She later diversified into scagliola – fake marble.


Eleanor was able to turn around the failing factory and make it successful. What set her business apart from other artificial stone manufactories was the quality and design of her products. She refined the formula for artificial stone – what she called lithodipyra – and carefully controlled the firing process, making her stone frost-resistant. She also employed top designers, most importantly, fellow non-conformist, the sculptor John Bacon (1740-1799).

In the 1780s, she took her cousin John Sealy into partnership and the business became known as Coade and Sealy.

Eleanor used every opportunity to promote her business. In the late 1790s, she built a gallery at the south bank end of Westminster Bridge where the public could come and view her products. She even sold guidebooks to visitors so that they could take a self-guided tour. The gallery participated so successfully in the peace illuminations of 1801 and 1802 that it was mentioned in The Times.

Eleanor drew people into her business by advertising in the newspaper when she had spectacular commissions on display, such as the colossal statue of Lieutenant-General Lord Hill, or new pieces for sale which she hoped would generate a lot of interest, such as the Warwick Vase.


When John Sealy died in 1813, the firm’s name reverted to Coade. Eleanor took on a distant relative, William Croggon, to manage the manufactory, but she did not make him her partner, nor did she leave him the business on her death.


Eleanor died at her home in Camberwell, Surrey, on 16 November 1821 aged 88 years. Her will included bequests to many charities and clergymen, and to numerous single women who were less fortunate than herself.

Coade stone has proved its durability by the number of pieces that have survived 200 years of facing the elements. Here are some that I have come across in my travels:

Coade stone lion in the visitor centre, Old Royal Naval College, Greenwich
The lion was designed by Benjamin West as a trial piece for the pediment in the King William Courtyard commemorating the achievements of Vice Admiral Horatio Nelson.

Belmont House, Lyme Regis
This house was given to Eleanor by her uncle Samuel Coade and is decorated with Coade stone.

Coat of arms on the front entrance of Saltram, Plymouth, Devon

A Regency History guide to titles for married daughters of dukes, marquesses and other peers

Last month I blogged about the correct way to refer to dukes and lesser peers in narrative. You can find that blog post here. This post tackles the subject of titles of married daughters of peers.

My previous post provoked a lot of discussion. The most searching question I was asked (by my husband Andrew who is used to me muttering about titles being used wrongly) was whether titles were used correctly at the time or whether these rules were just the ‘correct’ way and abused as much as the rules of grammar are today. In response to this, I have included some examples from contemporary newspapers and magazines to illustrate whether the rules seem to have been applied or not.

I have studied the rules and drawn up some charts which show what title the married daughter of a peer takes, based on my interpretation of these rules.

If the daughter of a duke marries a peer, she takes his title. If she marries the eldest son of a peer, she takes his title, but in the case of the heir of an earl or lesser peer, she may choose to keep her own title until her husband inherits. In all other cases, she keeps her own title, even if she marries the younger son of a duke, as the daughter of a peer ranks higher than a younger son of the same level of peerage.

Let us take the fictitious example of Lady Augusta Hampton, daughter of the Duke of Wessex, and her marriage to Charles North of Swanage of varying rank. 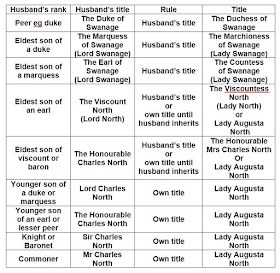 There were very few dukes (only 18 English dukes at the end of the Regency period) and as most of their daughters married peers, I have struggled to find records of these rules coming into play.

The only example I have found is in a newspaper report on the presentations at the Queen’s Drawing Room in The Times on 13 April 1810 and this appears to show them being used wrongly. Among those presented to the Queen were Lord and Lady Leveson Gower.

Granville Leveson Gower was the younger son of the Marquess of Stafford. At this date, he had no peerage of his own. His wife was Harriet, the daughter of the Duke of Devonshire. According to the rules, I would have expected to see them listed as Lord Granville Leveson Gower (title from his father) and Lady Harriet Leveson Gower (title from her father), but in this report, both Christian names were omitted. It is hard to tell whether this is significant or just a space saving exercise in the newspaper!

If the daughter of a marquess marries a peer, she takes his title. If she marries the eldest son of a peer, she takes his title, but in the case of the heir of an earl or lesser peer, she may choose to keep her own title until her husband inherits. If she marries the younger son of a duke, she may choose to take his title or keep her own. In all other cases, she keeps her own title.

In this example, Lady Augusta Hampton is now the daughter of the Marquess of Denmead who is marrying Charles North of Swanage of varying rank. 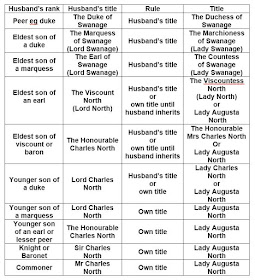 As with dukes, there were similarly few marquesses in the Regency and I have no records of examples to share.

If the daughter of an earl marries a man of equal or greater rank, she takes his title. In all other cases she retains her own title.

Lady Augusta Hampton is now the daughter of the Earl of Harting who is marrying Charles North of Swanage of varying rank. 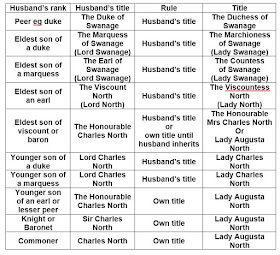 Were these titles actually used?


There were many more earls than dukes or marquesses in the Regency and there are plenty of instances of daughters of peers marrying commoners and retaining their titles. For example, Lady Anne Lindsay, the daughter of the 5th Earl of Balcarres, married a commoner, Andrew Barnard, and became known as Lady Anne Barnard (You can read about her here.)

Caroline Ponsonby was the daughter of Frederick Ponsonby, Viscount Duncannon. When her father became 3rd Earl of Bessborough, Caroline became known as Lady Caroline Ponsonby, and she kept this title on her marriage to William Lamb, who had no courtesy title as the eldest surviving son of Viscount Melbourne. As Caroline died before William inherited, she never shared his title.


Lady Anne Lowther, daughter of William Lowther, Earl of Lonsdale, married Sir John Beckett, Baronet. In an illustrative memoir in La Belle Assemblée in 1829, she was referred to as Lady Anne Beckett.

The Honourable Augusta Hampton is now the daughter of the Viscount Droxford who is marrying Charles North of Swanage of varying rank. 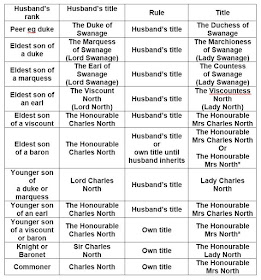 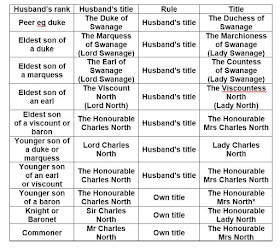 A note about the use of “The Honourable”


The daughter of a peer ranks lower than the eldest son of the same level of peer and higher than the younger sons of the same level of peer. However, where both titles are “The Honourable” but the wife’s rank is higher (those entries marked *), I have not been able to determine whether she would use her Christian name or her husband’s or neither. It should be noted that the title “The Honourable” is never used in speech and according to Black’s, their visiting cards would simply state Mr North and Mrs North, without title or Christian names.

Sources used include:
A Member of the Aristocracy, Manners and Rules of Good Society (1888) (1916)
A Member of the Aristocracy, Manners and Tones of Good Society pre 1880
Bell, John, La Belle Assemblée (John Bell, 1806-1837, London)
Black, Adam and Charles (publishers), Titles and forms of address - a guide to their correct use (9th edition)(1955)
Debrett, John, The Peerage of the United Kingdom of Great Britain and Ireland (1820)
Lamb, Charles (?), A book explaining the ranks and dignities of British Society (1809)