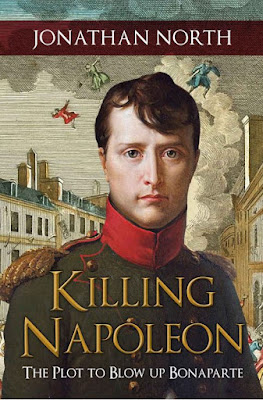 On Christmas Eve 1800 Napoleon Bonaparte narrowly escaped being blown to pieces while travelling to the Paris theatre. A cart carrying a barrel of gunpowder was deliberately detonated in a busy street, with the aim of killing the new ruler of France. Several Parisians were less fortunate, becoming innocent victims of the assassination attempt.

In Killing Napoleon, historian Jonathan North gives a thorough account of events before, during and after that dramatic moment in Paris. He explains how the plot emerged from the swirling mess of Revolutionary and counter-Revolutionary currents, which saw Bonapartists, Jacobins (pro-Revolutionaries) and Royalists jostling for control of their nation’s destiny. With what appears to be a thorough examination of the contemporary records, North details the moments surrounding the explosion and the dramatic aftermath, which included the forced exile of perceived enemies of Bonaparte who had no connection with the plot to kill him.

A compelling read and rich in detail

I found Killing Napoleon to be a compelling read - largely because I was unfamiliar with the story and was keen to discover the fate of those involved. It was obvious that Bonaparte survived - the explosion took place almost fifteen years before Waterloo. But what became of the perpetrators, and who, if anyone, was behind them?

On top of that I was curious about the impact on Paris of what became known as the Plot of the rue Saint-Nicaise. Today we would call it an act of terrorism. While the motive was to kill one man, the bombers (as we would call them today) were willing to sacrifice the lives of civilians going about their daily business.

For those less familiar with the ebb and flow of French political life between 1789 and 1800, North provides a useful summary. He describes Bonaparte’s rise, alongside the continued resistance to the Revolution by Chouans in western France. The action really begins when the future Emperor seized power and became First Consul in late 1799.

I particularly enjoyed three aspects of North’s book - the story of the plot, and his illumination of both Parisian life and the world of espionage in 1800. The details were absorbing, and it was worth keeping a finger in the back of the book to read the footnotes. I had no idea that early forensic testing of pistol balls for poison involved persuading a dog to swallow them and then monitoring its health. From the notes I learned of the 1800 Law of the Trousers, requiring women to hold a licence in order to wear them. It was only abolished in 2013!

For all that I was entertained and informed by North’s telling of this story, his is first and foremost a history book. Which makes it an excellent resource for those wanting details about the events surrounding the outrage on Christmas Eve 1800.

Not an easy read

As a story, it’s less accessible. The book is rich in facts, particularly names, but arguably there are too many to make it easy to follow. On top of that, the text is what I describe as ‘academic prose’. That is, complex sentences, assumptions about the reader’s knowledge, and surprising words. I now know that ‘quotidian’ means ‘everyday’. While I admire rich vocabulary, I think there’s a place for using language that the majority understand.

All of this stood between me and the story. Which is a pity, because it is an extraordinary tale when you consider how close the conspirators came to killing the man who would go on to shape Europe. It’s also surprising how inept they were - taking few precautions to cover their tracks, with the inevitable results once the authorities commenced their hunt.

The plot of the rue Saint-Nicaise

The plotters were Chouans, that is, Royalists from western France who had resisted the Revolution, often with violence. The police, whose activities are described by North in some detail, knew they were in Paris and knew of the threat to Bonaparte. Indeed, other schemes, organised by disillusioned Revolutionaries, had already been uncovered in 1800. One of these involved a bomb; the other was perhaps more a figment of the imagination of police informers. Such was the atmosphere in Paris that justice was swift and probably not entirely fair.

At the heart of the plot were Saint-Réjant, Limoëlan and Carbon, who were backed by Chouan leaders outside of Paris. They in turn were financed by the British Government. They identified the best location to place the bomb on Napoleon’s route to the theatre, and constructed it by filling a barrel with gunpowder and pieces of metal. Saint-Réjant experimented with fuses in the fireplace of his lodgings, in full view of a young girl of the household. This was just one of a list of indiscretions recounted at his trial.

Despite their apparent lack of concern for being observed, somehow the three men constructed the bomb and drove it on a cart through the Paris streets. Positioned so as to impede the First Consul’s coach, the cart was left with Saint-Réjant, who lit the fuse as he saw the target approach.

His timing was off, and Bonaparte’s coach had already passed the barrel when it exploded. The First Consul was woken by the blast and insisted on being driven to the theatre where he was acclaimed by the audience when they heard of the atrocity.

Many in the busy rue Saint-Nicaise were less fortunate. Almost a dozen died and scores were injured. North provides a detailed record of the many whose lives were ended, or changed forever, by the blast.

While violence and death were not uncommon in Paris of 1800, there was outrage at the manner in which these innocents of rue Saint-Nicaise had died. No one wanted to be associated with such a crime and the public wanted swift justice. Bonaparte seized the opportunity to send into exile over 100 Jacobins he wanted to be rid of, despite their having no part in the plot.

Of the bombers, Saint-Réjant and Carbon were tracked down, tried and guillotined. Limoëlan escaped and travelled to America where he became a Catholic priest.

A thorough examination of attempted assassination

North provides a satisfying amount of detail in the postscript, footnotes and coda of his book. But for me, he left one question unanswered - what became of rue Saint-Nicaise? When I next travel to Paris, how close can I get to the scene of the crime and what markers, if any, remain?

The answer, it appears from other sources, is that there is nothing to see. The once-bustling thoroughfare has long been demolished.

I recommend North’s book to anyone keen to gain a better understanding of life in Paris in 1800, particularly with regard to policing and intelligence-gathering. It could provide a rich source of plot ideas for historical novels.

Killing Napoleon was published by Amberley in 2019 and has been reviewed at the request of the publisher.