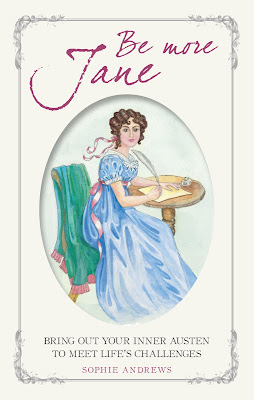 I first met Sophie Andrews at the Jane Austen Festival 2014 Regency Promenade in Bath. We were both taking part in the parade for the first time and were very excited to meet Adrian Lukis aka Mr Wickham from the BBC’s superb 1995 adaptation of Pride and Prejudice. It was a real pleasure to see that a passion for Jane Austen and her works had reached the next generation.

I am delighted to be able to weclome Sophie to my blog today in support of her literary adventure – a book entitled Be More Jane which is, unsurprisingly, all about Jane Austen and the inspiration her writing can be to us today. Be More Jane is a beautifully illustrated little gift book, ideal for Janeites. It is full of Jane Austen’s wisdom and some light-hearted sections drawn from Jane Austen’s novels such as The perfect way to catch a husband! - according to Miss Lydia Bennet.

Giveaway of Be More Jane

Thank you for all the wonderful quotes and comments on my blog. I found it too hard to choose and so asked my daughter Abi to pick. The winner of the copy of Be More Jane is Romancing Romances with a quote from Northanger Abbey:


Friendship is certainly the finest balm for the pangs of disappointed love.

An interview with Sophie Andrews

Thank you, Rachel, for welcoming me here today and for starting my blog tour! It has been such an exciting journey, writing Be More Jane, and it feels wonderful, if nerve-wracking, to be finally sharing it with others!

What inspired you to write Be More Jane?

I had been toying with the idea of a book for a little while, but I could never decide exactly what to focus on, or how to go about it, so it remained just as an idea at the back of my mind, for a future date perhaps. But then, out of the blue last summer, I received an email from CICO books, enquiring whether I had ever thought of writing a book! As well as being very surprised and rather flattered, this persuaded me to go for it and gave me the impetus to begin planning! It was talking through my ideas with my publishers at CICO Books that gave me confidence and finally convinced me that perhaps after all, I could have a go at writing my book.

I really like the line: ‘Some people tell a good story, but it takes time to establish the truth.’ I think there’s a lot of truth in that. In the long run, character beats charisma every time. What is your favourite quote from Be More Jane and why?

Such a hard question! I have included so many favourite Jane Austen quotes in Be More Jane, and there are many more I didn't have room for! One of my favourites would be ‘Where shall we see a better daughter, or a kinder sister, or a truer friend?’ which I use in the chapter Jane on Brothers and Sisters. I have one older sister myself and we have always been close, very much like Jane and Lizzy Bennet. Seeing the many sibling relationships that are included within Austen's novels (some of them unhappy ones), as well as reading about Jane's relationship with her own brothers and sister, makes me appreciate my own sister. In times of trouble, a sister is often your best friend. (And, as I say in my book, I am sure brothers are great too!)

Jane Odiwe’s illustrations are beautiful. I really like the picture of the Cobb in Lyme Regis, just along the coast from where I live in Dorset. Which is your favourite and why?

Aren't they stunning? I was so pleased to be able to recommend Jane for the illustrations, as she is a good friend and I have always loved her artwork. I know she is knowledgeable of both the books and the Regency era and was confident she would create beautiful, historically accurate images with a classic feel that would complement my style of writing - and she did not disappoint. In fact, Jane exceeded my expectations with her bright colours and thoughtful scenes. Choosing just one favourite is impossible! I simply can't, sorry! I am particularly fond of the front cover artwork. Jane informed me she had drawn the image with me in mind - a brunette - and wearing a blue dress!

I feel the drawings fall into two categories - landscapes and character-based scenes - so I can perhaps narrow it down to a favourite from each. Landscapes: I think my favourite has to be the Sunrise at Box Hill. I adore the morning colours and the serenity of the scene. Characters: I think it has to be Lizzy walking to Netherfield Park, her hem 'six inches deep in mud'! This scene really resonates with me - I have muddied my hem many a time! I also love Netherfield in the background, based on Basildon Park. This National Trust house was used as Netherfield in the 2005 film, and it is near to where I live, so I have many happy memories there.

You mention the only known proposal of marriage that Jane Austen received, from her friends’ brother, Harris Bigg-Wither. What do you think prompted her to originally accept his proposal? And why do you think she changed her mind?

Of course, in Austen's time, the need to marry was paramount. We see this truth reflected often in her novels, a prime example being Mrs Bennet, who is very aware of the need to find husbands for her five daughters. Some would say she is a little too enthusiastic! Jane Austen would of course have understood the importance and the security which an advantageous marriage would bring her and, especially after the death of her father, the need to secure a comfortable future for herself, her mother and her sister. However, she was also a very strong-minded woman who wrote about heroines who do not conform to society. They will marry, only if it is for love, and not because society demands it or their father has arranged it.

Therefore, I feel that she would also have wished this for herself. She did not want to tie herself to a loveless marriage. This is why I think she first accepted, only later to refuse; I believe the security this marriage could have brought to her family would have played heavily on her mind and initially persuaded her to accept, only later to then mull it over and really think about what she wanted for herself. And that was not to become Mrs Bigg-Wither. It was such a brave decision, but one I do not think she will have regretted. I am glad she turned him down; had she married, I do not think we would have the 6 amazing novels, the unfinished works and all the delights she gave us. She would have been too busy keeping house and becoming a mother, as she would undoubtedly have been expected to produce an heir.

What is the best piece of advice for you personally that you have gleaned from Jane Austen’s writing?

Again, I have taken so much from Austen in all aspects of my life - well, that's what my book is about! But I think one of the most important pieces of advice is what I touch on in Jane on Self-Belief: ‘Laugh as much as you choose, but you will not laugh me out of my opinion.’ I went through many of my younger years hiding my true self and pretending to be someone I wasn't. I even hid my love for Jane Austen from most people for quite a while too! But Austen taught me to be proud of who you are, and an ‘obstinate, headstrong girl’ if necessary - which I certainly can be at times! Now I am not afraid to tell anybody and everybody how much of a Janeite I am.

Thank you again so much for letting me pop into your blog, and for some great interview questions. And now I really hope you all enjoy my book, Be More Jane!

CICO books are giving away a copy of Be More Jane on every blog in Sophie's blog tour, so be sure to follow the blog tour for more chances to win. 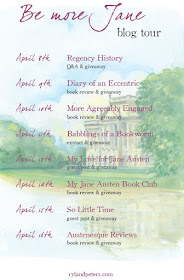 About Be More Jane

Are you more Marianne than Elinor, Lydia rather than Lizzy? Be More Jane will teach you to address life with more sense and less prejudice, taking useful lessons from the novels and letters of Jane Austen, one of the world’s best-loved writers. Times may change, but many of our problems remain the same. Sophie Andrews, a young Janeite, knows from personal experience that in times of trouble, or just on matters of friendship, family, and love, answers are to be found in the pages of Miss Austen’s novels.

Sophie Andrews is a founder member of the Jane Austen Pineapple Appreciation Society, and organises events such as picnics, balls and house parties for her fellow Austenites. Sophie started her blog, Laughing with Lizzie, in 2012, aged 16, after studying Pride and Prejudice at school. She has been attending Austen-themed events since then, and was featured in the BBC documentary My Friend Jane which focused on the fun and friendship she has found with her fellow Janeites. She lives in Berkshire and has over 100 different editions of Pride and Prejudice on her bookshelves.