A Reason for Romance is out now! 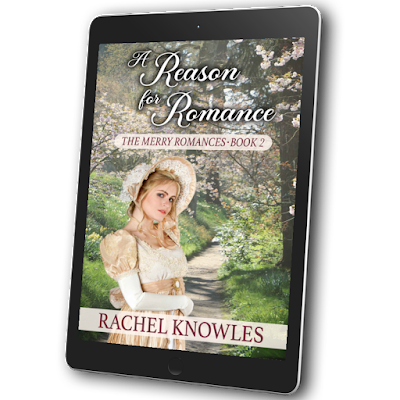 A Reason for Romance is out on Kindle!1 This is the long-awaited sequel to A Perfect Match (now with a new cover2). It’s only taken me six years to publish it…

And so a series is born – The Merry Romances. 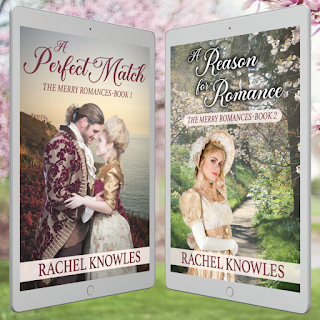 What is A Reason for Romance about?

Set in 1810, 20 years after the close of the last book, A Reason for Romance is the story of Georgiana Merry, the eldest daughter of my hero and heroine from A Perfect Match.

The Earl of Castleford believes he’s found the love of his life. Georgiana Merry is searching for a romantic hero nothing like the reserved Earl. How can he capture her heart before the intriguing Sir James steals it away?

Repelled by his father’s unfaithfulness, Lord Castleford has locked away his feelings, saving them for one woman alone. He does not expect her to be the impulsive Miss Merry, the reckless young lady whose elopement he once foiled.

Georgiana Merry tends to act on her feelings with no thought to the consequences. She goes to London looking for romantic love, but all she finds is friendship with the philanthropic Lord Castleford.

The appearance of the fascinating Sir James seems like the answer to her dreams.

But Georgiana has been misled by her feelings before. Afraid of making another mistake, she takes counsel from the mysterious Sylph - her self-appointed guardian who sends her anonymous letters.

Can the Sylph help her discover where her heart truly lies before she makes another decision she might regret?

What research did you do for this novel?

Lots! I spent time researching London charities like the Asylum and the Magdalen House as institutions that my charitable Lord Castleford could be involved with.

Feltham’s The Picture of London has been a valuable resource, giving me details about the season’s entertainments, as well as the tourist attractions that Georgiana’s younger sister Hetta drags Lord Castleford and Georgiana around.

Another great resource I used to research this period was the Persian ambassador’s journal of his stay in London in 1810-1 which gave me contemporary descriptions of various places and events, some of which I have used in the novel.

I also reread The Sylph, by Georgiana Cavendish, Duchess of Devonshire, which was my Georgiana’s favourite book and the inspiration for part of the story.

A painful bit of research

Early on in the book, Georgiana’s sister Eliza goes ice skating and falls over. She hurts her ankle, and I wasn’t sure how long she would be out of action. Would it ruin her whole season? During the first Covid lockdown in March 2020, I missed my footing and sprained my ankle. It took a couple of months to recover, and I certainly wasn’t ready to dance on it then. I had my answer, but it was very painful research.

What was your favourite scene to write?

I can’t pick one! Building to the climax was exciting to write and the final getting together was emotional, but I can’t be more specific without giving away the plot…

But I can say that I set two separate scenes at masquerades and it was great fun creating the disguises and the way they impacted the action.

Do you need to read A Perfect Match to enjoy this book?

No. Each book is a complete story in its own right.

How would you describe the genre of the series?

As The Merry Romances start 20 years before the Regency, I don’t like to call them Regency romances, but that is what they are in feel, if not in date. I have taken to describing them as clean historical romances set in the time of Jane Austen (ie during her lifetime). They fit into the clean and wholesome/sweet/Christian Regency/historical type category.

Does the matchmaking mother from A Perfect Match appear in the sequel?

Yes. Mrs Merry’s matchmaking mother (now a grandmother) is an important character in A Reason for Romance. You may or may not be glad to hear this. A reader once told me she wanted to hit her, she was so annoying!