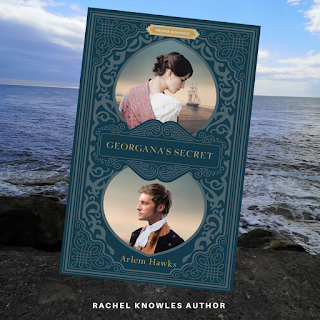 A gripping story of courage and kindness, and love on the high seas during the Napoleonic wars.

Georgana's Secret is not your typical Regency romance. It is set on a man-of-war during the Napoleonic wars, and the sea-loving Lieutenant Dominic Peyton doesn’t even realise that the downtrodden cabin boy George who arouses his compassion is actually a girl. And not just any girl – the captain’s daughter, Georgana Woodall, who has come to sea in disguise to escape her grandmother’s cruelty.

When I posted on Instagram that I was reading Georgana’s Secret, several people told me I would love it. And they were right. Once I started reading, I didn’t want to stop.

I found Hawks’s style engaging, and quite a few lines worthy of highlighting (ah, the beauty of Kindle).

I really enjoyed the way the friendship between Peyton and Georgana took root and blossomed as a result of Peyton’s kindness. 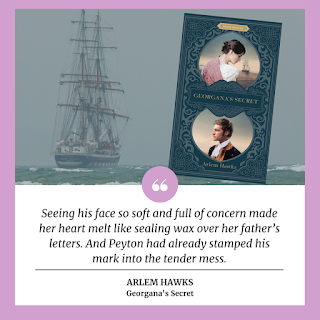 There was a nice historical reference to Napoleon’s surgeon, Dominque Jean Larrey (1766–1842). He was the surgeon in charge of author Fanny Burney’s mastectomy. I was not surprised to discover amongst his other achievements the introduction of a medical technique similar to that described by Hawks.

I struggled a bit with the name Georgana at first. I’ve come across plenty of references to the name Georgiana in the Regency era, and a few to Georgina, but I’ve never come across this variation before. Although any name could have been used, I prefer Regency characters to be called names that we know were used. However, in this instance, it was a minor point as Georgana sounds possible and did not grate on me like using a name that belongs to a later century.

Although I know lots about the Regency period, I am not familiar with naval terminology or what the Admiralty decreed at all. It sounded right, but I had no idea whether it was. However, a brief examination of the words I didn’t know suggests that Hawks has done her research and has used the terms correctly.

I was interested to look up details of the Admiralty ban on women on board ship, given that in Jane Austen’s Persuasion, Admiral Croft’s wife makes no secret of the fact that she had accompanied her husband at sea. As Hawks suggests, it appears that though the rule existed, it was up to the officer in command of the vessel as to whether he enforced it.

My only comment about the story was that, perhaps, the conclusion was a little rushed (but maybe that was because I didn’t want it to end). I would have liked to see a little more heart searching by the characters before things were resolved.

No religious content bar a few mild references to prayer.

There is some violence (Britain was at war, after all) but no gruesome detail.

Heat level is low - nothing more than kisses and low-level longing.

A well-written Regency era romantic adventure set at sea. As long as you’re prepared for battles rather than balls, it won’t disappoint you.

Dinnertime in the Regency

When did a Regency lady eat her dinner?

When you’re writing a novel set in the Regency, it’s the simple things like mealtimes that can trip you up. It might not matter to everyone whether these facts are right or not, but I like to try and get the details as accurate as possible.

Did a Regency lady mean the same thing by the term ‘dinner’ as I do? And when did she eat her dinner? Was it at a fixed time every day or did it vary?

What was dinner in the Regency period?

The definition in the 1810 version of Samuel Johnson’s Dictionary is:

Dinner – the chief meal of the day.1

The definition in Johnson’s earlier 1785 version is:

Dinner – the chief meal; the meal eaten about the middle of the day.2

And the definition in Thomas Dyche’s 1771 dictionary is:

Dinner – the meal or quantity of food a person eats about noon.3

The latter definitions are throwbacks to earlier years when dinner was eaten around noon or even earlier. However, by the Regency period, dinner was no longer eaten in the middle of the day, but during the afternoon or evening. It seems that dinner continued to mean the substantial nature of the meal even when the time of eating changed.

This fits with my experience of the word dinner. I would only use the word dinner to refer to my main meal of the day, though I usually eat it in the evening and sometimes call it supper.

There is no definitive answer to this question! Dinnertime varied as much in the Regency as it does today. That said, we can build up a picture of when people tended to eat their dinner using contemporary sources, such as letters, journals and novels written in the period. Some of the best sources I have found are the journals of foreign visitors, who tended to note customs that were different from their own.

Dinnertime was affected by many factors: class; town or country; fashionable or less fashionable; dining as a family or giving a dinner with guests; on the road or at home.

As a visitor to England in 1810, Don Manuel Alvare Espriella wrote:

The dinner hour is usually five: the labouring part of the community dine at one, the highest ranks at six, seven, or even eight.4

The later, the more fashionable

In the country, people tended to eat earlier than in town. Because of its association with London, eating later was seen as more fashionable.

In December 1798, Jane Austen, at home in Steventon, wrote to her sister Cassandra who was staying in the more fashionable Godmersham with their brother Edward:

We dine now at half after three, and have done dinner I suppose before you begin—We drink tea at half after six.—I am afraid you will despise us.5

Jane’s dinnertime had shifted somewhat by 1808. She wrote to her sister in December:

Kitty Foote came on Wednesday; and her evening visit began early enough for the last part, the apple-pie, of our dinner, for we never dine now till five.6

In Pride and Prejudice, when Elizabeth is staying at Netherfield:

At five o’clock the two ladies retired to dress, and at half-past six Elizabeth was summoned to dinner.7

The time of dining shifted later still as the Regency progressed and the start time for performances at the theatre were moved later to accommodate this. Feltham’s Picture of London for 1818 says:

The modern dinner hours of 7, 8, and 9 o'clock, have doubtless interfered with the frequent attendance of a large portion of the population, at entertainments which take place between the hours of 6 and 11; yet two theatres, through a season of 200 playing nights, each capable of containing 3000 persons, are moderately filled, and often crowded. To accommodate the public, the theatres have altered their times of beginning to seven o'clock.8

In her inimitable manner, Jane Austen poked fun at the fashionable custom of eating later and later in her unfinished novel, known as The Watsons:

He [Tom Musgrave] loved to take people by surprise with sudden visits at extraordinary seasons, and, in the present instance, had had the additional motive of being able to tell the Miss Watsons, whom he depended on finding sitting quietly employed after tea, that he was going home to an eight-o'clock dinner.

The carriage was ordered to the door, and no entreaties for his staying longer could now avail; for he well knew that if he stayed he must sit down to supper in less than ten minutes, which to a man whose heart had been long fixed on calling his next meal a dinner, was quite insupportable.9

According to Samuel Johnson’s dictionary (1810):

A dinner entertainment would be more elaborate and last much longer than a family dinner.

In the journal of his visit to London in 1810, the Persian ambassador wrote that a dinner lasted for four hours, from 6pm to 10pm.11

In Pride and Prejudice, Mrs Bennet mourns the fact that Mr Bingley is not able to join them for dinner because he has gone out of town:

After lamenting it, however, at some length, she had the consolation that Mr Bingley would be soon down again and soon dining at Longbourn, and the conclusion of all was the comfortable declaration, that though he had been invited only to a family dinner, she would take care to have two full courses.12

Cruickshank, Dan and Burton, Neil, Life in the Georgian City (1990)

Johnson, Samuel, A Dictionary of the English Language (6th edition 1785)