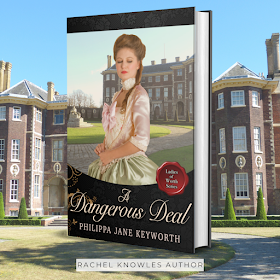 The unconventional Lady Rachel Denby longs for independence from the men who have ruled her life. Having been pushed by her dictatorial father into marriage with an elderly man, Rachel is left a childless widow and will do anything to avoid returning to her father’s house. She proposes a marriage deal to Julius, Viscount Arleigh, who needs to marry quickly to secure his inheritance. Once this is settled, they will part and live separate lives, and he will make generous provision for Rachel. Neither of them expects the friendship that grows between them or the feelings that bubble up, threatening to destroy their deal.

A Dangerous Deal is a delightful, well-crafted Georgian romance. It is the sequel to Fool Me Twice and the second book in the Ladies of Worth series. It continues the story of many of the characters, but works as a standalone romance.

I really enjoyed watching the transformation of the characters. At the start, I didn’t have much sympathy with either hero or heroine, but they reveal more of themselves as the story progresses and I was drawn in as their unlikely romance evolves. There are some really heart wrenching moments which made me desperate to get to the happy ever after.

I loved all the little historical details, such as the different dress styles worn, a reference to Richardson’s Pamela (a 1740 novel), and a description of Prior Park in Bath, home of Ralph Allen. (You can read about Ralph Allen here.)

There are some excellent backup characters, including Rachel’s sister, the nosy Lady Rebecca, and their somewhat eccentric Aunt Etheridge. I liked the description of the gossipy Lady Goring – “all paste and rouge”.

A key part of the plot in A Dangerous Deal is the agreement to separate once Arleigh has won his inheritance. Would legal separation have worked in this situation?

Divorce in Georgian England was a rare thing. It was expensive, as it could only be brought about by an Act of Parliament and was by no means guaranteed as not all petitions for divorce were accepted. It was expected that a legal separation would already be in place and in cases of adultery (criminal conversation), that the husband would have sued for damages in the civil courts.

Legal separation was under the jurisdiction of the church courts. Either husband or wife could sue for separation on the basis of life-threatening cruelty or adultery, but it was still expensive. Women who were granted separation could live apart from their husbands, often supported by an allowance from their husband set by the court. Usually the wife still lost custody of the children.

However, a legal separation like this would have been unnecessary as the proposed separation was part of a deal, and both parties agreed to it. I don’t think there would be anything to stop the Arleighs setting up separate establishments by a private legal settlement without going through the courts. 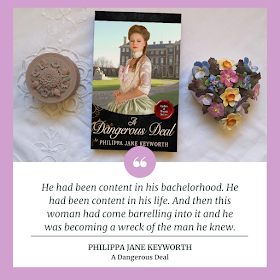 A word about titles

Titles are tricky. It’s difficult to get them right, but Keyworth does a good job.

Lord Arleigh is referred to as Viscount Arleigh. This is alright as a viscount can take his title from place or family name, and in neither case is the  preposition ‘of’ used.

Arleigh’s mother is known as the Dowager Lady Arleigh after his marriage to distinguish her from his wife, Lady Arleigh. His sisters are correctly designated Honourable.

Lady Rachel Denby is the daughter of an earl. Her father is called Lord Fairing. Most earls take their titles from a place but there are some who use their family name and in this instance, you don’t use the ‘of’, so this is correct.

Rachel’s first husband was called Sir Denby, though it is unclear whether he was a baronet or a knight. Either way, he was a commoner and so she retains her title as the daughter of an earl with her husband’s surname.

However, her husband should be referred to as Sir Christian name, and Denby is his surname. But as I don’t think his Christian name is mentioned, I guess he could be called Sir Denby Denby – unusual but possible – in which case this would be okay.

You can read more about titles here and here.

I love knowing exactly when the author has set the novel I’m reading rather than having to guess at it from the detail. Although I knew this was a Georgian romance, it wasn’t until quite near the end that there is a dated letter which sets the date as 1776. I would have liked to see this information at the start.

Unusually for a romance, Keyworth uses multiple points of view, not just those of the hero and heroine. It slows the development of the story a little, but I think this is more than outweighed by the interest that the side stories add to the book.

Warm, but not immoral

Several years ago, I decided to stop reading what I call “bodice rippers” – romances where the couple end up in bed before getting married and sometimes even before one or both of them is in love. I realised it was unhelpful for me to be feeding my brain the lie that sex outside marriage is more exciting or to be reading too much detail of what that perfect sex looked like.

A Dangerous Deal is probably the raciest novel I have read since making that decision, but it ticks all the right boxes for me. Yes, there are references to sex, but they are not crude, and it is only married couples who go to bed together, with the bedroom door firmly shut behind them. Not a book I’d recommend to an under-18 for this reason, but if you like an emotional romance with a bit of warmth in a moral context, I think you’ll find this right up your street.

No violence. Some mild swearing, but nothing stronger than damn.

One mention of the sovereignty of God in a speech by Lady Etheridge.