A charming friends-to-lovers romance where worth and affection triumph

After Margaret Hall misses her first season due to severe illness, her mother decides to hold a house party to introduce her to several eligible bachelors, notably the Viscount Hatfield.

Her childhood friend Nathaniel Blake is also invited, but Lady Hall does not consider him of sufficient standing to be included amongst the potential suitors for Meg’s hand.

Which is a pity, because Nathan is the one who makes Meg laugh and he has been in love with her for years…

I really enjoyed this well-written Regency romance with its friends-to-lovers plot. In the same way that I included family trees at the start of A Reason for Romance, Thornell shared a guest list for the house party which highlighted the potential suitors. I thought this was a clever way of helping the reader keep tabs on the different characters.

Although this was a novella, I felt the characters were beautifully crafted and I had a whole story with enough time to reach a happy ever after without feeling rushed. 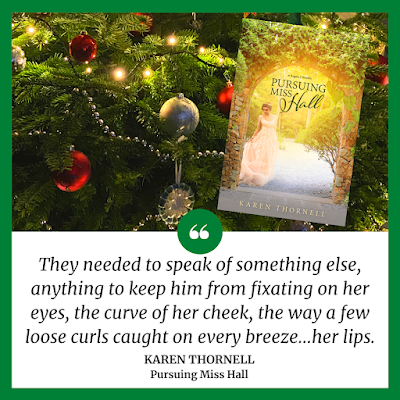 Was croup a serious illness in the Regency?

The illness that kept Meg from her season was severe croup. I was somewhat surprised at this as I tend to associate croup with wheezy babies rather than with adults. However, according to my etymological dictionary, at this time, croup was the name for the ‘coughing illness’. This could refer to a number of different illnesses that affected the respiratory system. So maybe Meg had suffered from a severe chest infection rather than the sort of  croup that keeps babies awake at night.

What do you call the wife of a baronet?

A baronet’s wife is called Lady Surname. Meg’s mother is correctly referred to as Lady Hall everywhere except in the guest list for the house party. It is very tempting to include Christian names when you are introducing a character and here she is referred to as Lady Arabella Hall.

This would be the correct way of addressing her if she were the daughter of an earl or peer of higher rank as she would keep the title she had from her father if she married a non-peer. If this were the case, she would be referred to as Lady Arabella throughout.

You can read more about titles for married daughters of peers here.

The trouble with pants

There is a mention of Nathan dusting off his pants. The US word for trousers jarred with me, but I suppose it could be seen as an abbreviation for pantaloons – the full-length, tight trousers that were fashionable in the Regency.

You can read more about the London season here.

Low heat rating with some mild trauma/accident. No swearing (unless you count ‘blasted’).

Rachel Knowles writes clean/Christian Regency era romance and historical non-fiction. She has been sharing her research on this blog since 2011. Rachel lives in the beautiful Georgian seaside town of Weymouth, Dorset, on the south coast of England, with her husband, Andrew.