The Great Gale in Weymouth and Portland


The UK has been battered by storms this week. Strong winds and heavy rain have caused severe flooding in some parts, with ferocious seas and swollen rivers bursting their banks. Down the road from where I live in Weymouth, the road over to the Isle of Portland was closed and the siren was sounded to indicate that the sea defences had been breached. Chesil Beach has been re-sculpted. Instead of steps of shingle down to the sea, there is now a steep wall of pebbles.


But this is nothing to the damage caused by the storm of 22-23 November 1824, known as the Great Gale. The storm that hit the south coast of England on the night of the 22 November 1824 is the worst that Weymouth and Portland has ever seen. Hurricane-force winds combined with spring tides to produce tsunami-like waves that topped Chesil Beach.

The sea water crashed over the top of Chesil Beach, crushing the village of Chiswell with the force of the sea. More than 30 houses were destroyed and many more made uninhabitable. At least 25 people lost their lives, swept away by the water or crushed beneath the ruins of their homes.


The destruction of lives and property at Chiswell, Portland Island, Dorset, has been most dreadful; about twenty men, women, and children, were found dead and missing, and more than two hundred persons were without a habitation, and not a particle of property left them. There was scarcely a boat left out of the great number that belonged to the fishermen of the island. Whole streets were swept away in less than half an hour from the time the sea first made in, which was about six o’clock in the morning, and the cries of despair and suffering of the poor unfortunates upon whom the houses were falling, was dreadful. Numbers were dangerously wounded and bruised in their courageous and humane endeavours to rescue others from death.1


The wild waters eroded Chesil’s pebbled bank and 'the Chisel Bank throughout its whole extent was lowered some twenty to thirty feet.'2

The rope-drawn ferry that operated between the mainland of Weymouth at Wyke and the Isle of Portland, was destroyed by the storm. The ferryman’s cottage was swept away and the ferryman was drowned trying to save a horse.

The sandbank which had previously enabled horses and wagons to drive across to the Island at low water was completely washed away and the gap between Wyke and Portland was four times as big. For some days, Portland was completely cut off from the mainland.


The rector of Wyke recorded:


The pier of Weymouth Harbour was materially damaged, and three fourths of the esplanade at Melcombe Regis entirely thrown down and demolished.2

The stone posts and chains were pulled from their places and destroyed. Waves poured over the road and flooded the houses on the seafront in Gloucester Row and the Crescent with sand, water and gravel. Boats were torn from their moorings and destroyed or carried down the main streets as if they were at sea.

At a place called the Narrows where the Weymouth backwater joined the sea over the road, two people were swept away and drowned.


The breakwater, and nearly the whole of the esplanade are washed away. The houses near the sea had four feet of water on their basements.1

At the Preston end of Weymouth, the sea again swept over the road and flooded Lodmor flat – where Lodmoor Country Park is today.

Further west along the coast at Abbotsbury, seven metres of floodwater were recorded. At East Fleet, a tidal wave picked up a haystack and other debris and crashed into the village. The church and several cottages were wrecked. In Dorchester, a falling chimney stack killed the Reverend Richman and his wife in their bed.

The storm wrought havoc on the seas causing shipwrecks all along the Dorset coast. The West Indiamen Carvalho and Colville were wrecked on Chesil Beach. 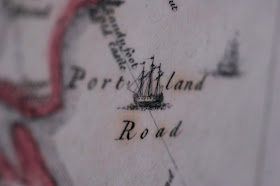 
Off Weymouth, a large ship, entitled the Colville, was wrecked, and every soul on board perished. Seventeen of the dead bodies were thrown up by the sea.1

One of those who drowned – Henry Gosling – was determined not to be buried in an unmarked grave and wrote his name and address on a piece of his shirt and tied it around his neck before he died.

The Ebenezer was more fortunate. The huge waves tossed the ship high onto Chesil Beach; its captain and one crew member were drowned, but the rest were saved. After being repaired, it was relaunched on the Weymouth side of Chesil Beach rather than attempting to lift it back over the top.

Notes
(1) From The Gentleman’s Magazine (1824).
(2) From a record of the storm by George Chamberlaine, Rector of Wyke church, written in the back of the baptismal register on 16 December 1824 as quoted in All about Ferry Bridge by Doug Hollings (1993).