What can "The Sylph" tell us about its author, Georgiana, Duchess of Devonshire?

I really enjoyed reading The Sylph. Why? Not because it was a brilliantly written novel; it wasn’t. And not because of the ingenious plot; it didn’t have one. But The Sylph gave me an inside view of life in the ton in the 1770s and, moreover, insights into the life of the author, Georgiana Cavendish, Duchess of Devonshire. If you want to know the plot, read my Regency History guide to The Sylph. In this post, I am going to look at what the book can tell us about the author.

Lady Stanley and the Duchess of Devonshire

There are many similarities between Lady Stanley, the heroine of The Sylph, and Georgiana, Duchess of Devonshire, the author. Julia Grenville marries Sir William Stanley, a man she hardly knows, at the age of 17, the same age at which Georgiana married the Duke of Devonshire. Lady Stanley had a beloved sister Louisa whom she wrote to after she was married; Georgiana had a devoted sister Harriet, later Lady Bessborough. Julia had two lady advisors, Lady Besford and Lady Anne Parker; Lady Besford is based upon Georgiana’s own worldly-wise friend, Lady Melbourne.


“Unacquainted with men and manners”

Georgiana expressed her own insecurities on entering the fashionable elite through her heroine’s words. Julia declared at the beginning of the novel:

All my hopes are, that I may acquit myself so as to gain the approbation of my husband. Husband! What a sound has that, when pronounced by a girl barely seventeen,—and one whose knowledge of the world is merely speculative;—one, who, born and bred in obscurity, is equally unacquainted with men and manners. (1)

An “unsafe and critical situation”

Georgiana was well aware of the dangerous position in which she was in. In the words of the hero’s friend, James Spencer:

The most unsafe and critical situation for a woman, is to be young, handsome, and married to a man of fashion; these are thought to be lawful prey to the specious of our sex. As a man of fashion, Sir William Stanley would blush to be found too attentive to his wife.

“A slave to fashion”

Georgiana’s disillusionment with her husband was expressed in Julia’s analysis of her husband’s character:

I think I can discover Sir William Stanley has great pride, that is, he is a slave to fashion. He is ambitious of being a leading man. His house, his equipage, and wife—in short, everything which belongs to him must be admired; and I can see, he is not a little flattered when they meet with approbation, although from persons of whose taste and knowledge of life he has not the most exalted idea.

Custom justified everything; nothing was indecent or otherwise, but as it was the ton.

In the same way that Georgiana was admired and loved by everyone but her husband, so was Julia. The Sylph was published in December 1778, just four years after Georgiana’s marriage to the Duke. Within its pages, we see Georgiana’s disillusionment with her own relationship and the heartbreak she was suffering through a lack of affection from her husband. Julia wrote:

Sir William seemed to tread on air, to see and hear the commendations which were lavished on me from all sides. To a man of his taste, I am no more than any fashionable piece of furniture or new equipage; or, what will come nearer our idea of things, a beautiful prospect, which a man fancies he shall never be tired of beholding, and therefore builds himself an house within view of it; by that time he is fixed, he hardly remembers what was his motive, nor ever feels any pleasure but in pointing out its various perfections to his guests; his vanity is awhile gratified, but even that soon loses its goût (2); and he wonders how others can be pleased with objects now grown familiar, and, consequently, indifferent to him.

“My damned love of play!”

Both Georgiana and Julia were drawn to gambling, but here the similarity ends. Julia had the counsel of the Sylph to urge her not to pursue her passion for gambling; Georgiana became addicted to play. It was, perhaps, Georgiana’s own feelings that were expressed in the words of Julia’s husband, Sir William Stanley:

Curses, everlasting curses, blast me for my damned love of play! That has been my bane. 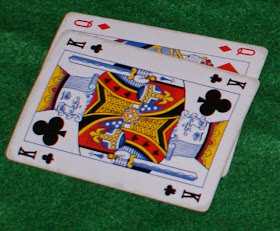 The Sylph also urged Julia not to be drawn into a relationship with another man, despite the infidelity of her husband. Maybe The Sylph was a cry for help – Georgiana’s realisation that she faced danger and needed help to make the right choices. Maybe it was a cry for freedom – a freedom that never came. The suicide of Julia’s husband freed her to make a second and better choice. Georgiana’s story had no happy ending.

Note
(1) All quotes are from The Sylph by Georgiana Cavendish, Duchess of Devonshire (1778)
(2) Goût is the French word for taste.