Finding your way around Vauxhall Gardens in Regency London

Vauxhall Pleasure Gardens were a fashionable outdoor entertainment during the Georgian era. You can find out what the gardens were like in my earlier blog: Vauxhall Gardens in the Regency.

When setting a scene in Vauxhall, I have found it helpful to know my way around the pleasure gardens and to know what features would have been present at different times. The rest of this blog post is based on my research.

The layout of the gardens


The picture below is from an engraving dated 1751, but the layout of the gardens would have been much the same in the Regency period. I have worked out where different features are in the print and where I think future features were, based on the ground plans in Coke and Borg (see bibliography). The numbering is my interpretation and hopefully is a reasonable representation of where things were.

A visitor entered (2) the gardens through the proprietor’s house (1) which opened onto the Grand Walk (3), with the Rotunda (4) and Pillared Saloon (5) on the left and the Grove (6) with the Orchestra (7) on the right and the Grand South Walk (8) beyond, and the Druid’s or Lover’s Walk (9) beyond that. The Dark Walk (10) is at the edge of the garden furthest from the entrance.

Below is the same annotated print split into three vertically to show more detail and make the numbers more visible.

Key to the map
Some of the more important changes between 1751 and 1830 were:
Here is another map of Vauxhall Gardens, based on a survey of 1826. The main difference between this and my annotated map above is that there appears to be a second Octagon Room on the opposite corner of the Grove. 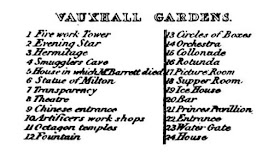