Georgians Revealed at the British Library 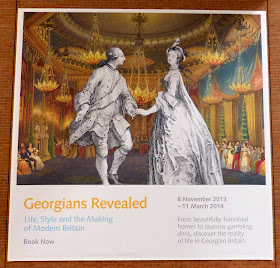 Georgians Revealed: Life, Style and the Making of Modern Britain is an excellent little exhibition at the British Library in London. But if you want to see it, you will have to hurry as it closes next week on 11 March.

The exhibition displays a variety of artefacts from the Georgian era illustrating the themes of public places, private spaces; buying luxury, acquiring style; and pleasures of society, virtues of culture. As well as the displays, there are several monitors giving additional commentary on some of the subjects that the exhibition touches upon. There is also a room with a Georgian map of London printed on the floor with wall displays highlighting various places around the city.

One of my favourite exhibits was of some letters written by Jane Austen and Fanny Burney, side by side. Jane was clearly trying to get every word that she could onto a single page. In one place, her tiny writing was very cramped. On the other hand, Fanny’s writing was much more spread out, perhaps suggesting that the cost of sending more than one sheet was immaterial to her.

What the internet can’t give you

The content of some of the publications on display was very familiar to me – such as Ackermann’s Microcosm of London – but seeing the physical books showed me something that the internet fails to: the actual size of these volumes. There were huge books of botanical drawings as well as tiny copies of children’s books. The only problem was that my fingers were itching to turn the pages and see the whole book, not just the page that was open for display. It was also nice to see real samples of material on the pages of Ackermann’s Repository.

The opening area of the exhibition presents visitors with a timeline alongside pictures of the four Georgian kings with a display board about each one. I was somewhat surprised to find that George III and Queen Charlotte were listed as having 16 children. I only know of 15 – nine sons and six daughters. Did the British Library know something that I didn’t know or had they got it wrong? I came home and double-checked. I did find one website that claimed that George had ten sons and six daughters but every other site I looked at, including the official British Monarchy website, referred to George’s 15 children. 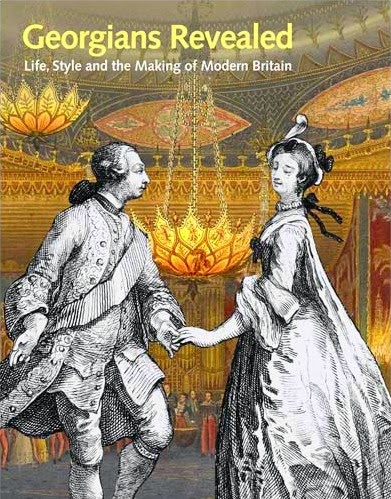 Georgians Revealed provides an excellent record of the exhibition. The book is full of illustrations and includes most of the exhibits that I want to remember. You won’t find every exhibit in it. Sadly, there is no picture of the letters of Jane Austen and Fanny Burney or of the trunkful of letters left behind by Scrope Davies when he fled the country to escape his creditors. But you will find pictures of the tiny set of children’s books mentioned above and a masquerade mask as well as dozens of prints by various artists, including Cruikshank, Rowlandson and Gillray.
Rachel Knowles
Share